The second part of my series focuses on one of the most integral parts of the British summer: the day trip to the seaside.

After a long period of contemplation as to the ideal destination for our trip, three friends and I decided on Brighton (or "B-"right on" as I am reliably informed it is nicknamed, due to its huge population of hippies, students, and other people relevant to our interests). This was partly due to its reputation as generally a lovely place to be, partly to its relative closeness to London, and partly to our massive respect for Caroline Lucas who won her party (the Greens) their first seat in the House of Commons there earlier this year (unfortunately we did not run into her there, more's the pity).

Having arranged the trip, packed our lunches, and picked a date early August, a ridiculously early start saw the four of us navigating the almost entirely "closed for maintenance purposes" London transport system to make our way to London Bridge Station, truly the most hideous of the London National Rail stations. Clutching desperately on to our super-saver rail passes, picnic lunches, and the only organised member of our group, we finally managed to find seats on the crowded train between the (many) hen parties also traveling to Brighton.

On the train we entertained ourselves by reading out articles from magazines and listening to the summer playlist which I had made for just such an occasion.

The trip was much shorter than I had imagined, and just under an hour in the train took us from gloomy grimy London to this: 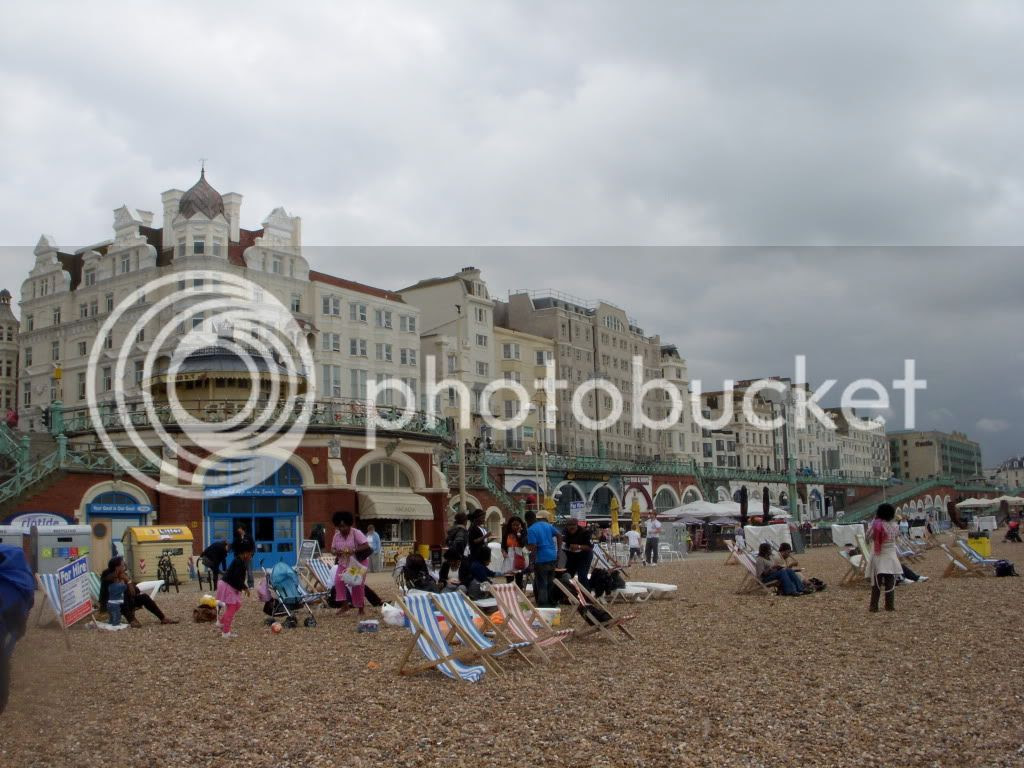 Admittedly still rather on the gloomy side, but it was much better than we had dared hope for with the weather forecasts for that day predicting thunderstorms and wind.

We set up our picnics on the beach (where there were even some brave people swimming!), and found ourselves having to strip off tights and jackets as the day started to warm up. As none of us had had the foresight to bring picnic blankets (there's always something) this proved particularly handy, as our discarded layers served as makeshift seating.

If there's one thing about British beaches I will never get used to it's the fact that rather than the golden sand which I am used to, they are covered in pebbles. However, the beauty and charm of Brighton more than made up for this, and I was soon completely in love.

After our lunch we stopped at a souvenir store to buy some postcards for family and friends, and in my case to greedily pick out the biggest stick of Brighton Rock I could find: 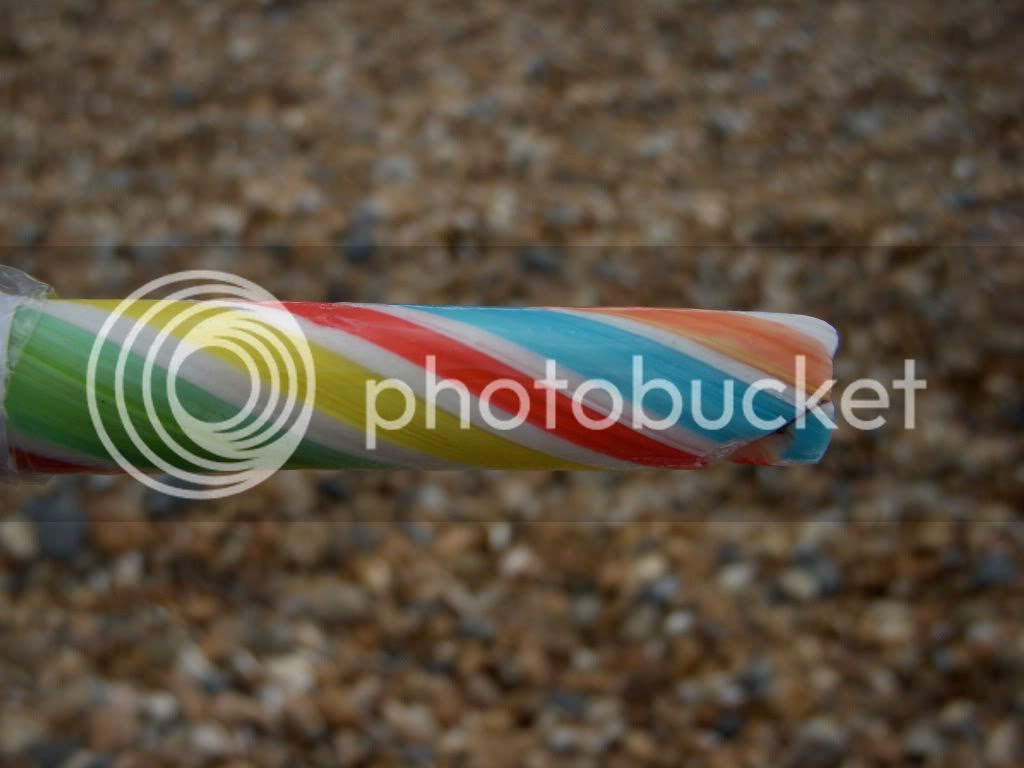 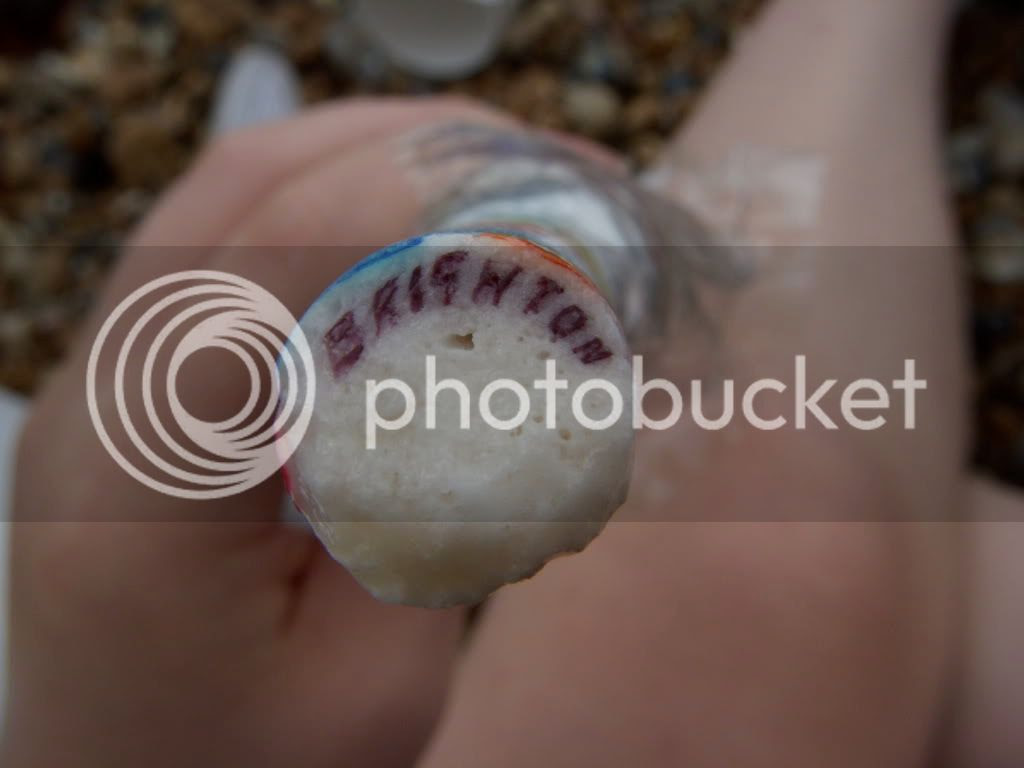 Having somehow managed to eat the whole thing, we started off for the pier, only to get caught in a massive downpour. We ducked into a nearby shopping centre to wait it out, and amused ourselves browsing through Waterstones and HMV. The rain cleared up fairly quickly, though, and we soon decided it was safe to head for the pier.

On our way we passed a carousel which we stopped to take a ride on: 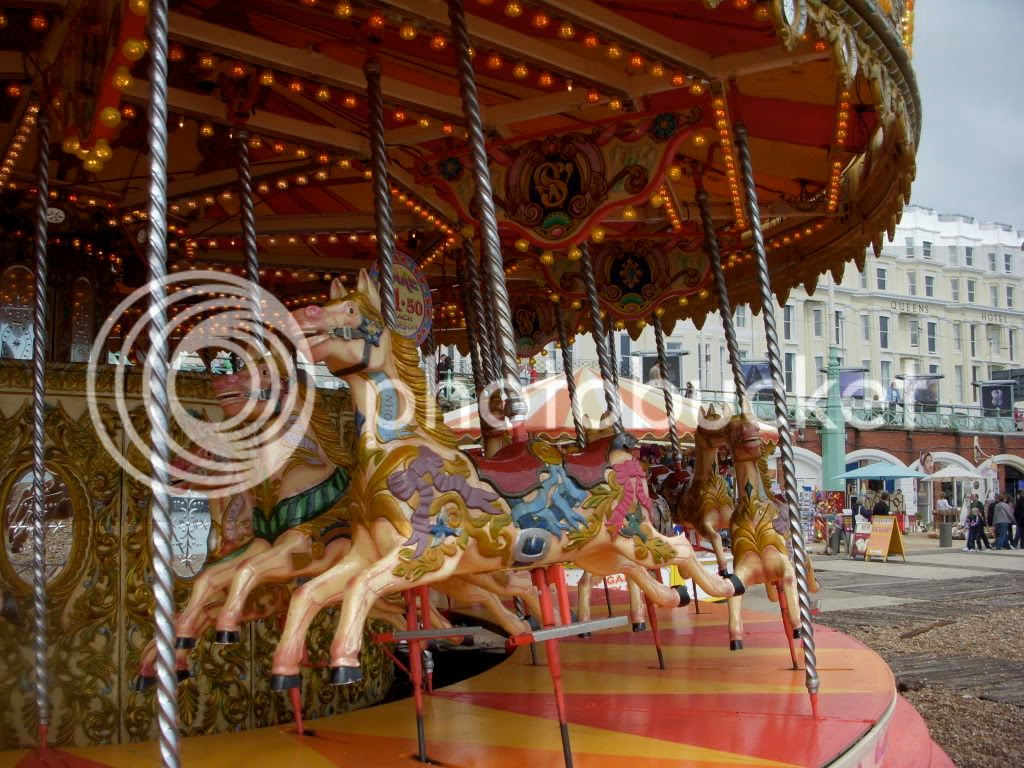 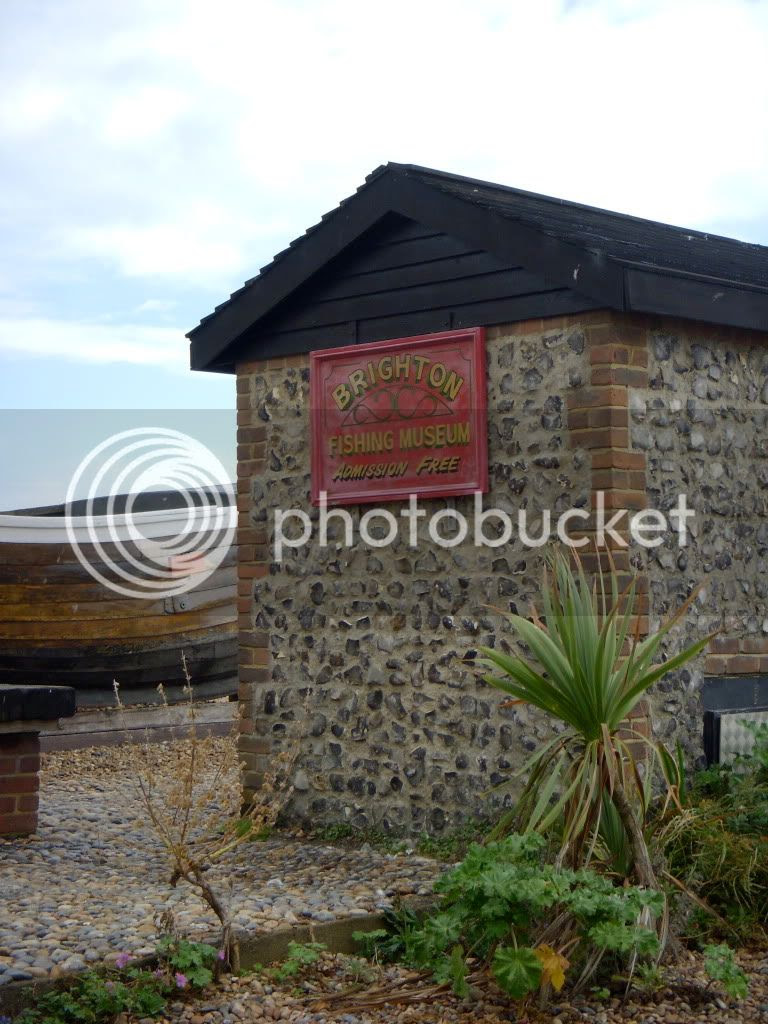 And a hilarious poster which we all wanted pictures with: 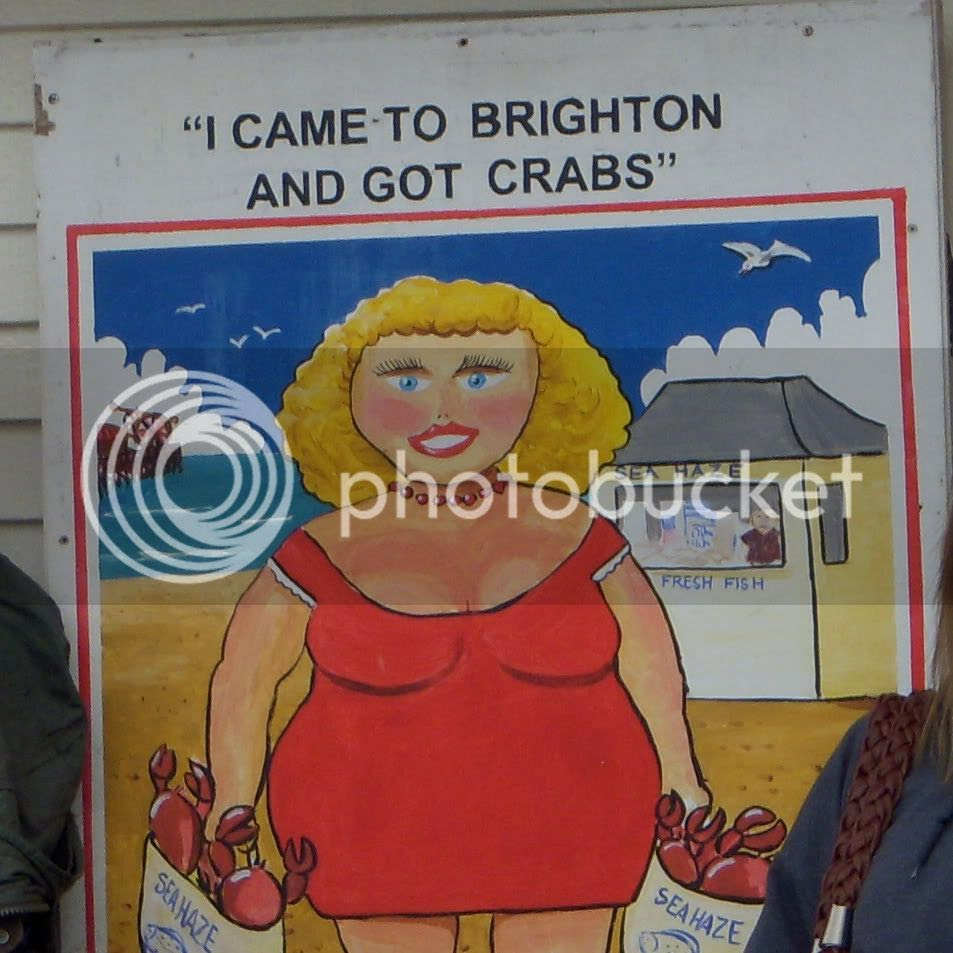 By this point the sky was bright and clear, and we could see the pier in the distance: 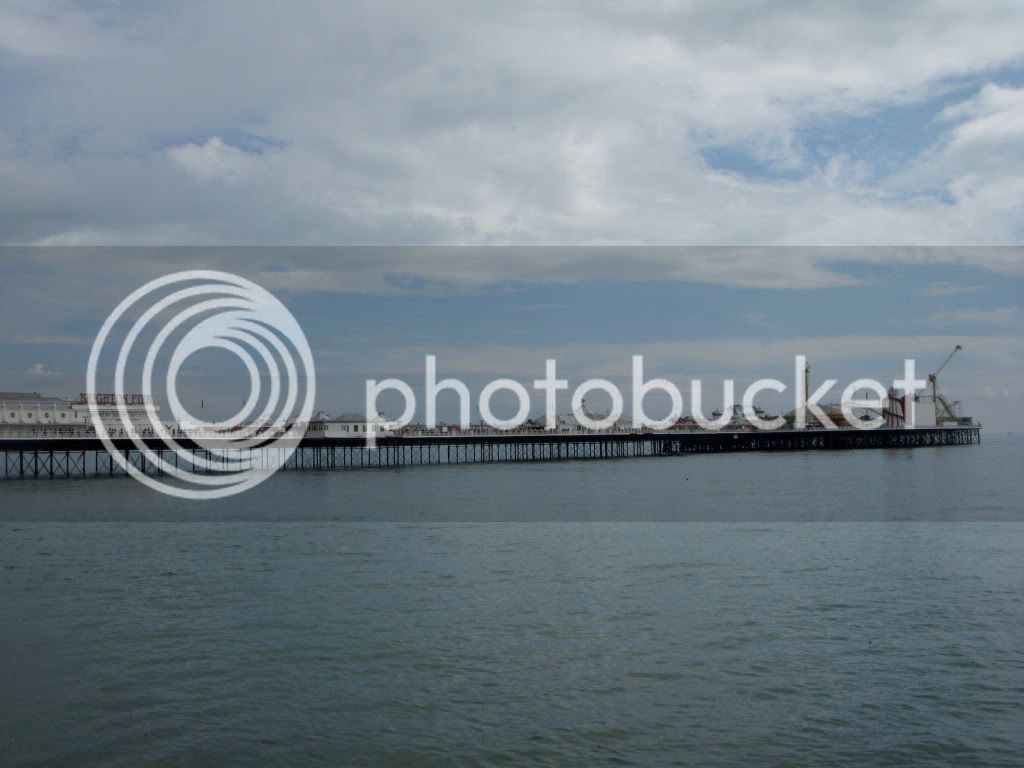 As we got closer we also got more excited, happily planning which rides we would go on. 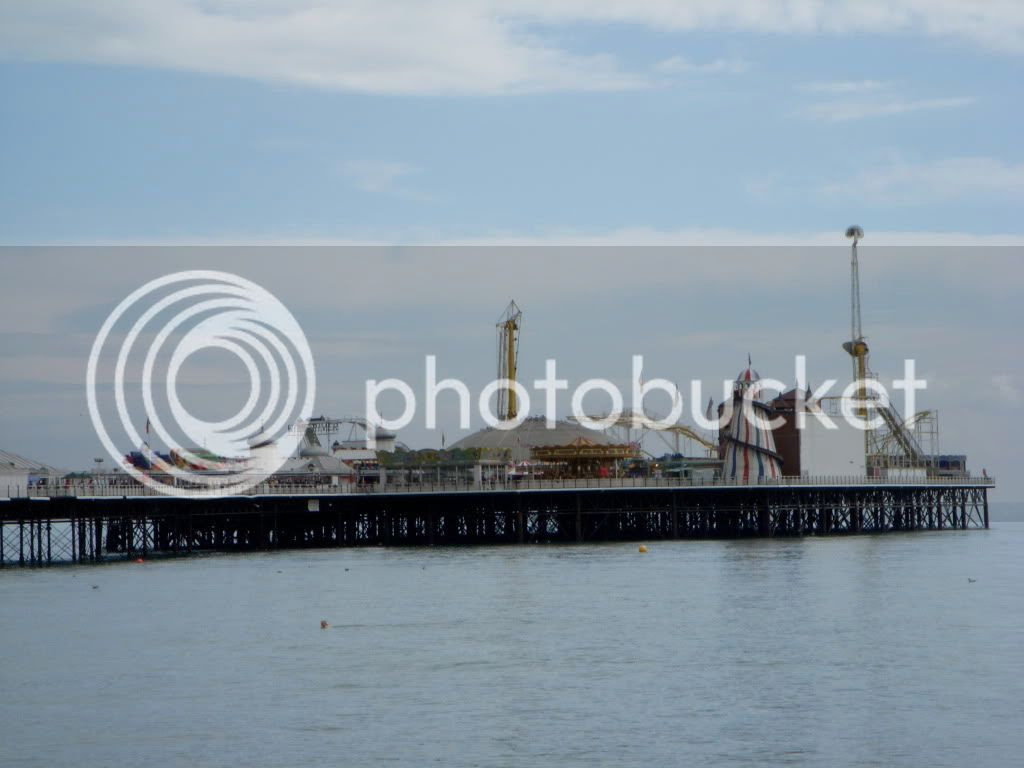 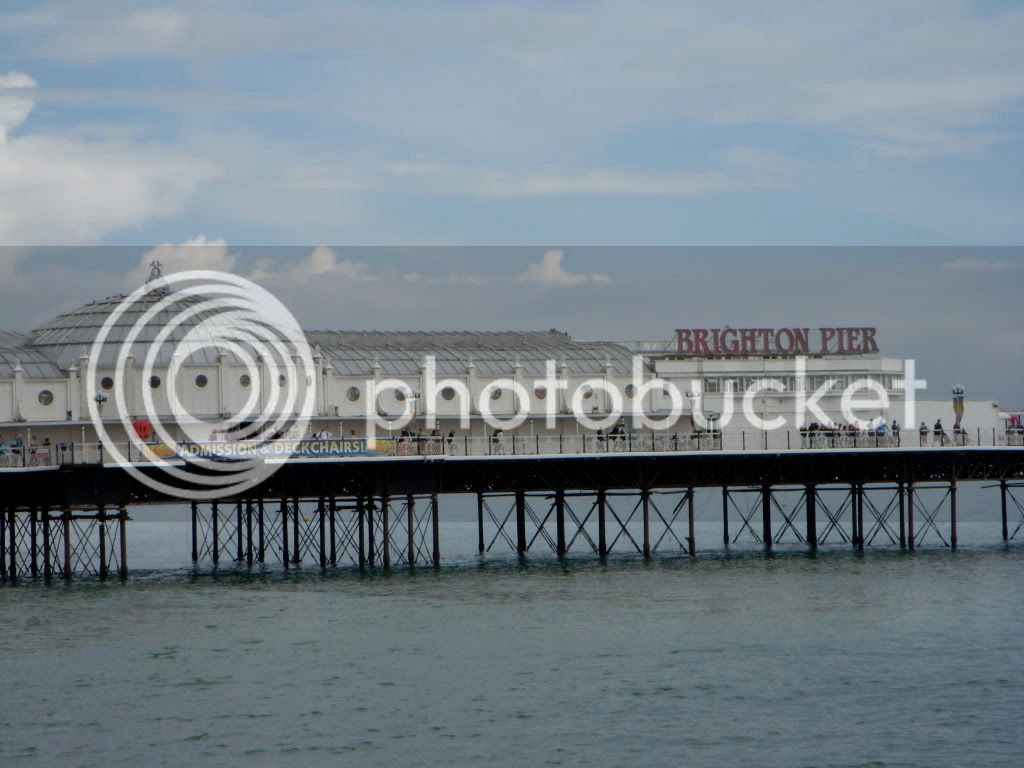 Finally we reached the pier: 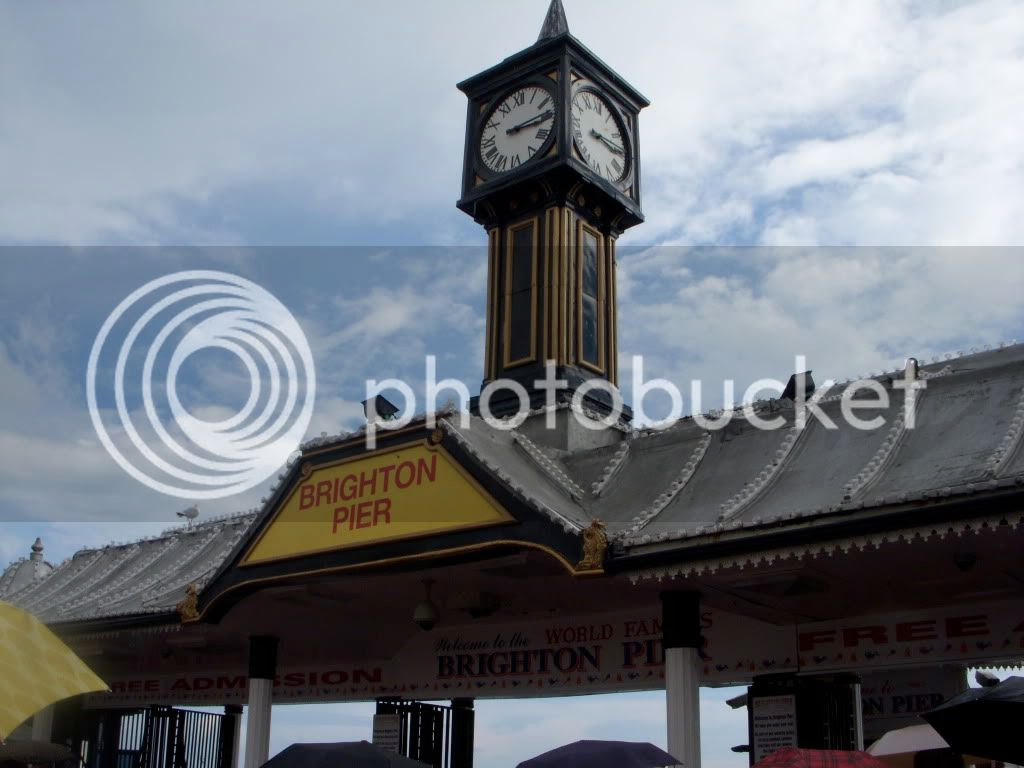 The weather at this point was extremely changeable, and it switched rapidly back and forth from sunny to rainy, as is clear in this photo of the entrance to the pier featuring blue skies and yet umbrellas lining the way: 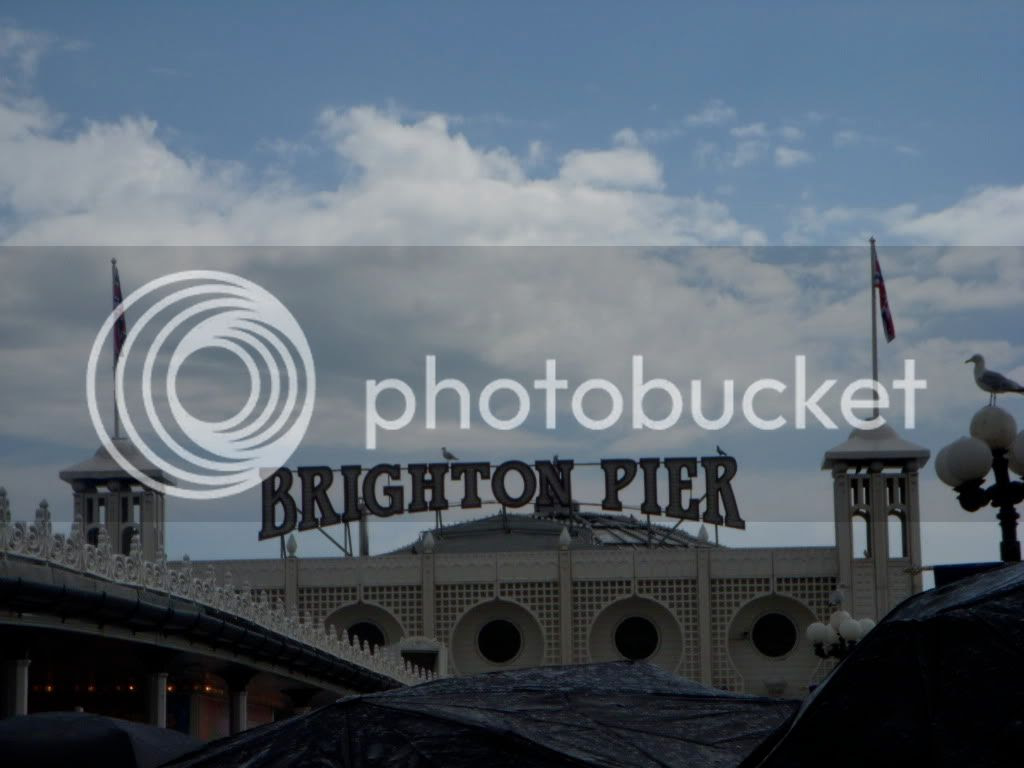 The good weather continued to be fairly on-off for the rest of the day, but on the whole it was much better than the reports had implied.

We managed to fit in yet another merry-go-round ride, me on the horse: 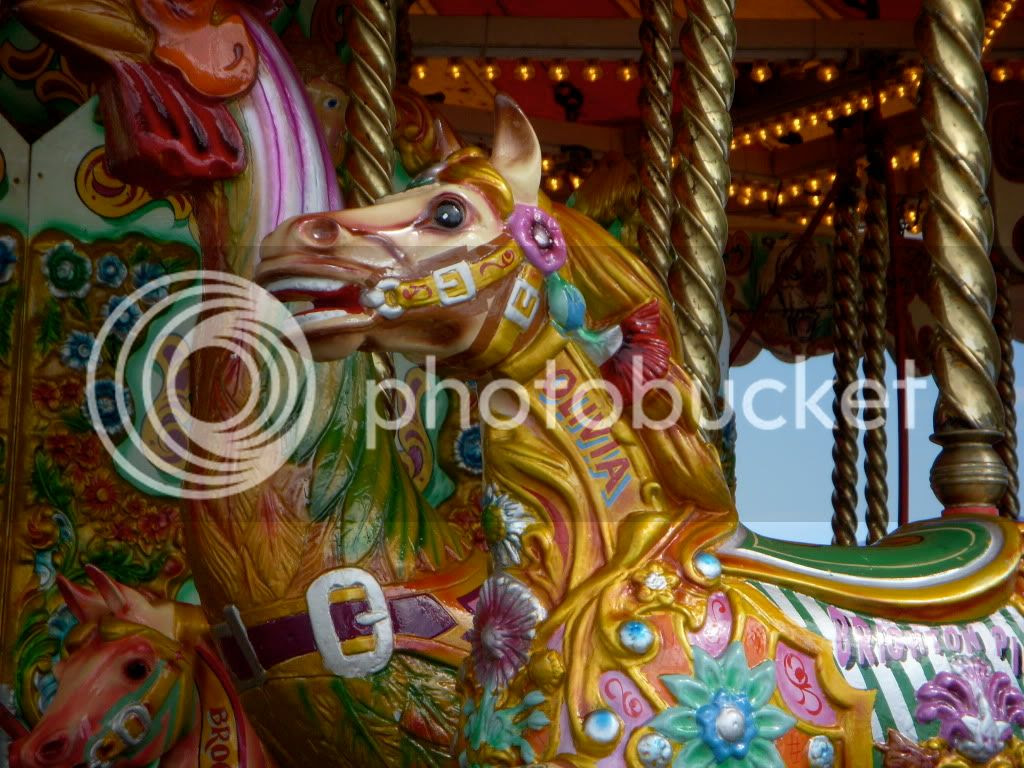 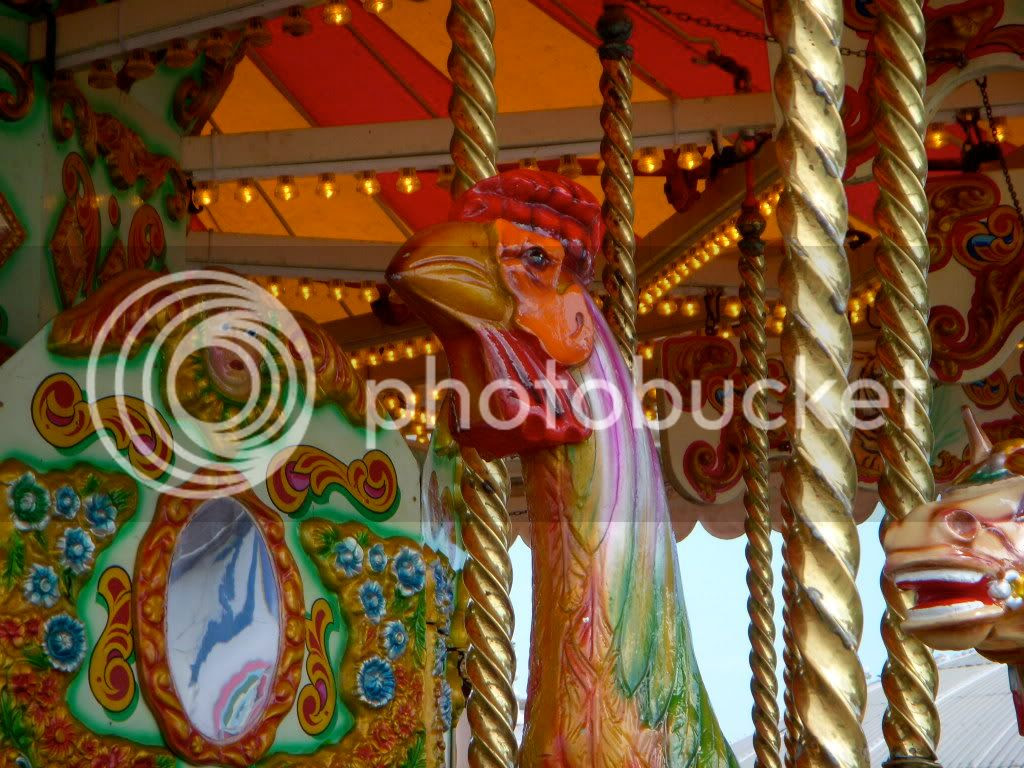 The bloke of our group even braved the bucking bronco: 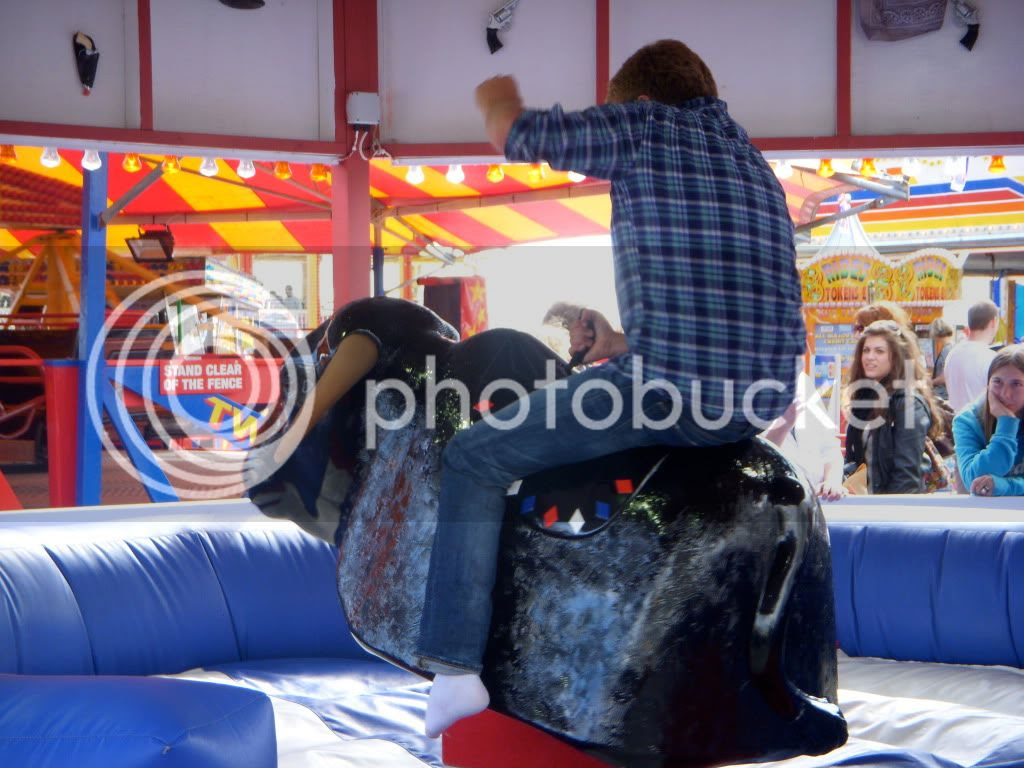 And did quite well! (Although not quite well enough to win a prize, but A for effort I suppose...).

The view from the pier was spectacular: 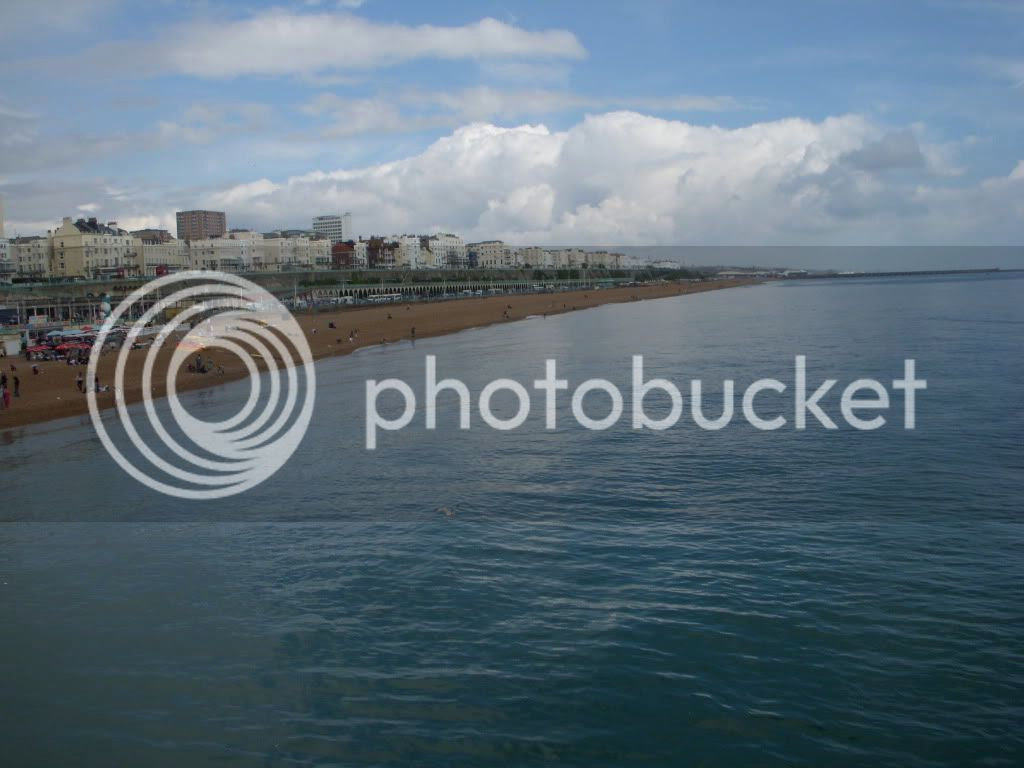 And we pottered around very happily for another few hours before it was time to head back for the train.

We stopped briefly on the beach one last time: 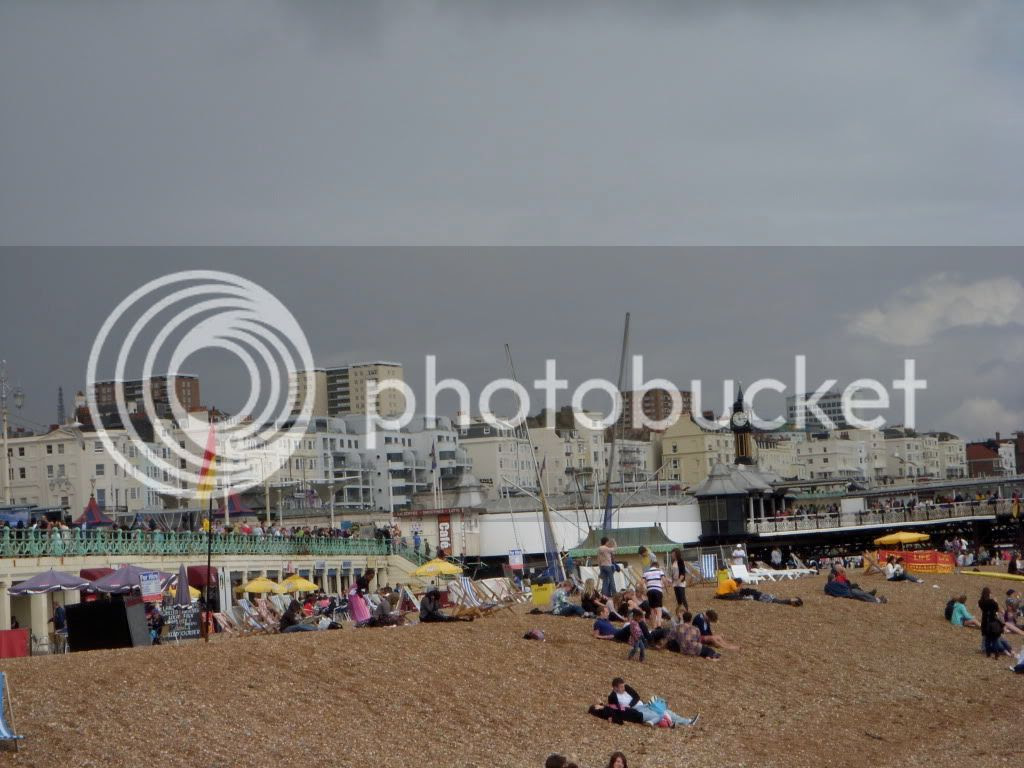 And amused ourselves by paddling and skipping stones (somewhat unsuccessfully in my case...) 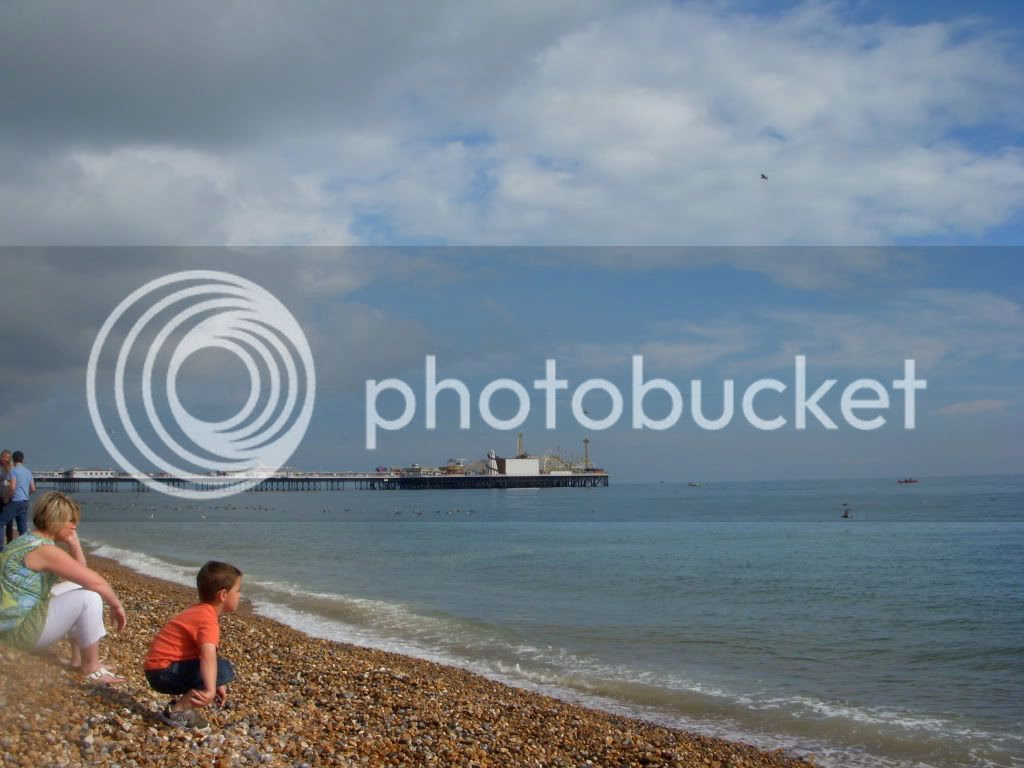 But it was time to leave, and we walked back with heavy hearts, finally arriving at the station: 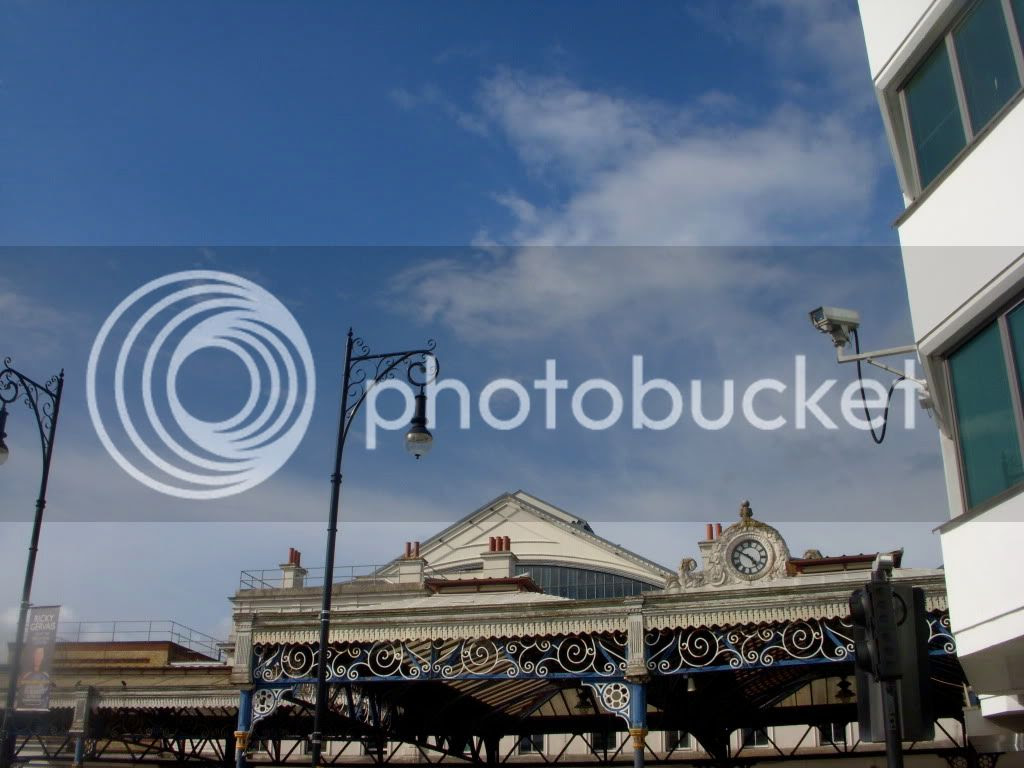 And boarding our train: 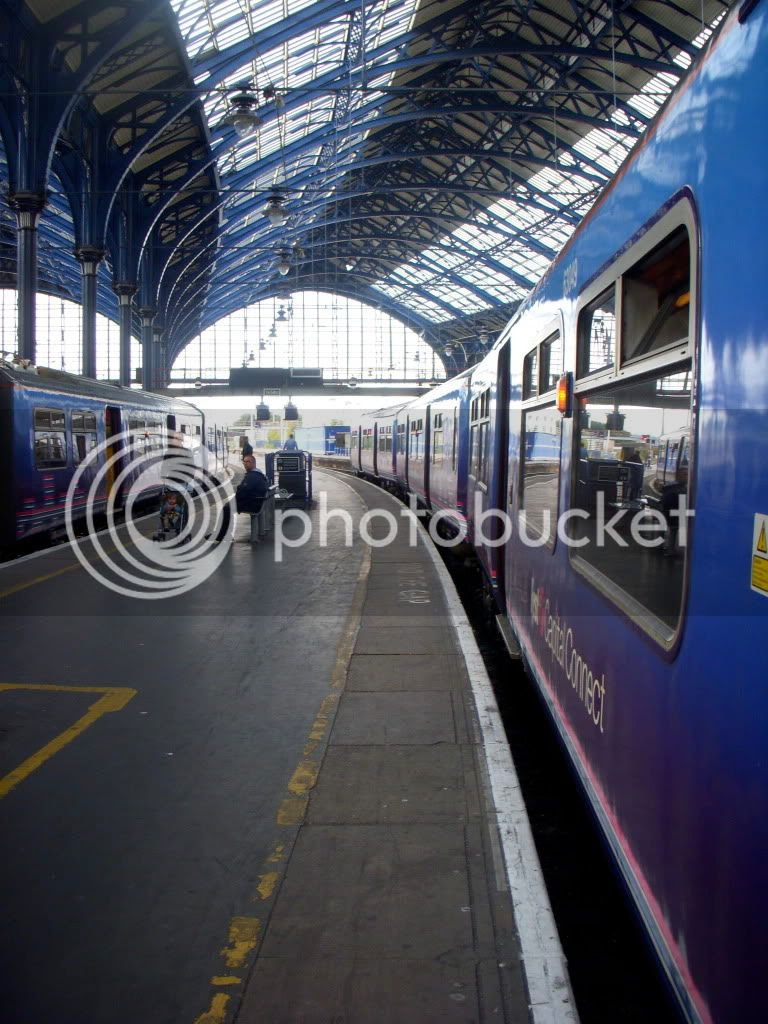 The trip back was far sadder than the one out, and upon arriving home I immediately demanded to my family that we go back to Brighton as soon as possible.

So what have we learned from this year's summer? 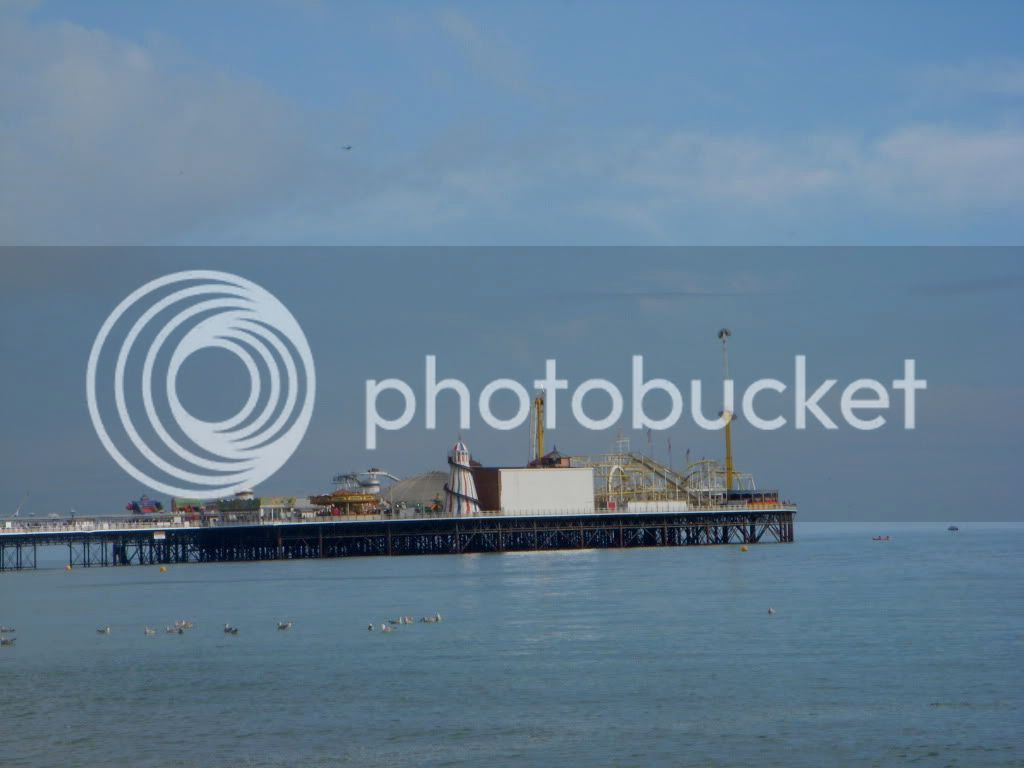