Burden of memory, art of reinvention

It's hard to think of a European city that has had a more difficult or dramatic history in the past century. The past weighs heavily on Berlin, and there are reminders of it everywhere you go. 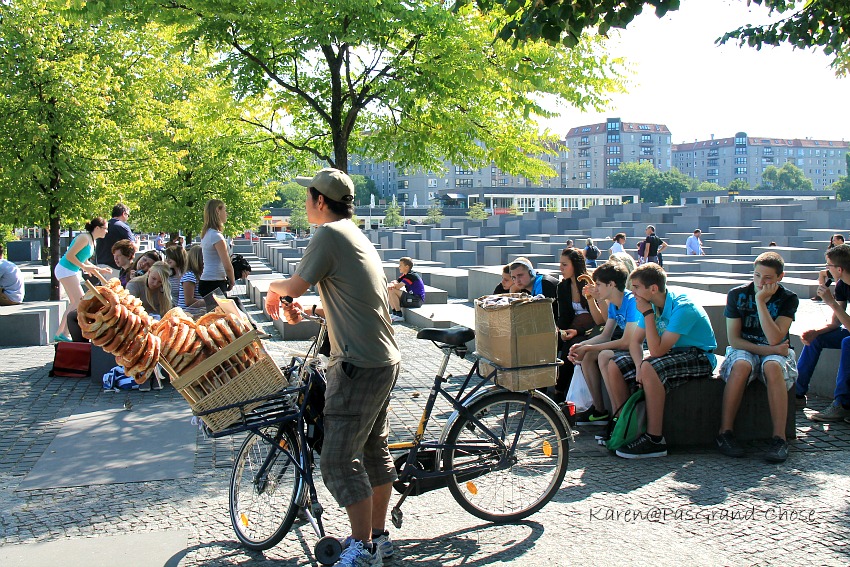 The Holocaust Memorial is strategically positioned close to the Reichstag. The creation of American modernist architect Peter Eisenman, it's a huge ‘field’ (almost 5 acres) of large, grey concrete blocks of rising and falling heights, rather like unmarked tombstones, with a labyrinth of pathways between them. 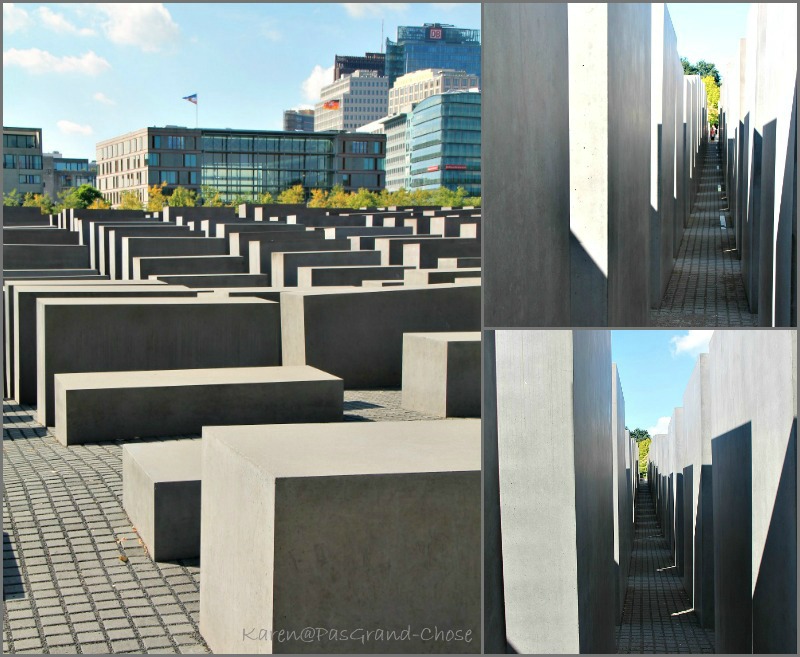 I found I couldn't quite make up my mind how I felt about it, and read later that it has stirred controversy, with critics saying it's too abstract and impersonal. But Eisenman apparently intended to convey both muteness (the slabs are unmarked but each has a unique size and shape) and groundlessness or instability (to convey the disorientation of victims in a system that had lost touch with reason).
He also said he wanted people to use it, as part of everyday experience, and in this he does seem to have been successful. 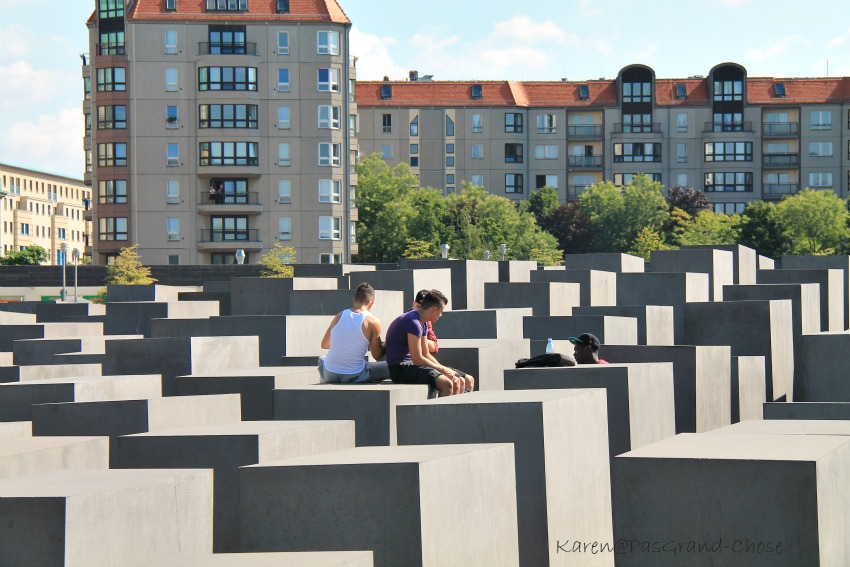 Some memorials are perhaps more powerful for being less obvious. This innocuous looking steel sign outside the Wittenbergplatz railway station, on a busy square, is something you could easily walk past without paying attention to, but my eye was caught in passing by the name at the top of the list ... 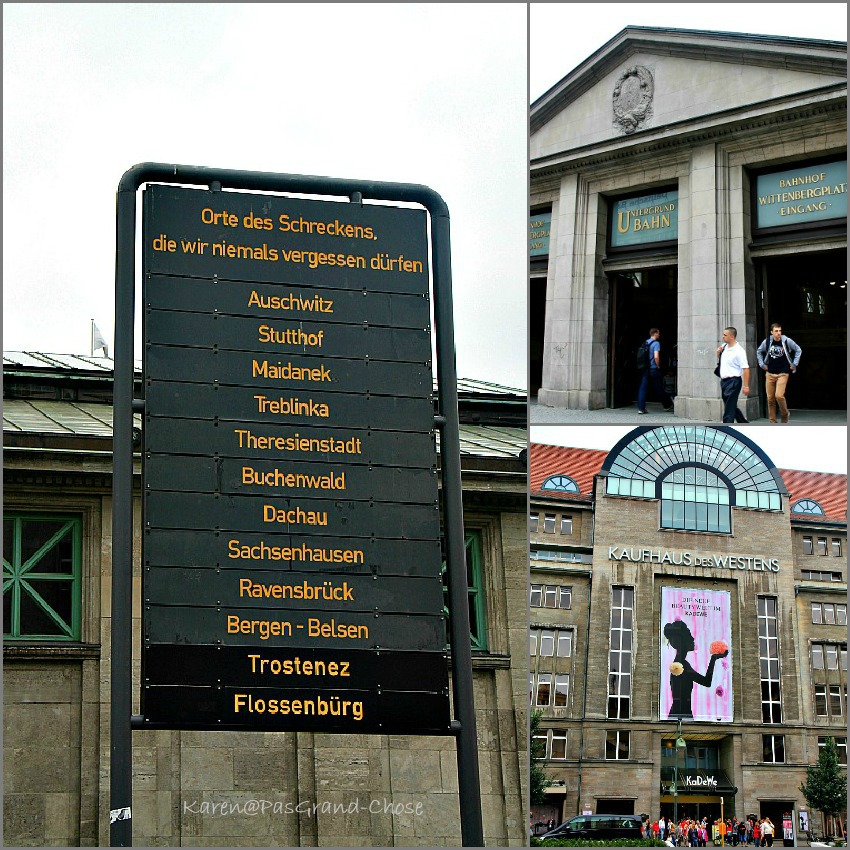 The legend "Sites of horrors, which we can never forget" is followed by a list of the death camps to which Berlin Jews were deported, presumably from this station. The sign's location, across the road from luxury department store KaDeWe, Berlin's version of Harrods, is also slightly jarring.

In a prime location on Berlin's central boulevard is the massive and imposing Soviet War Memorial ... 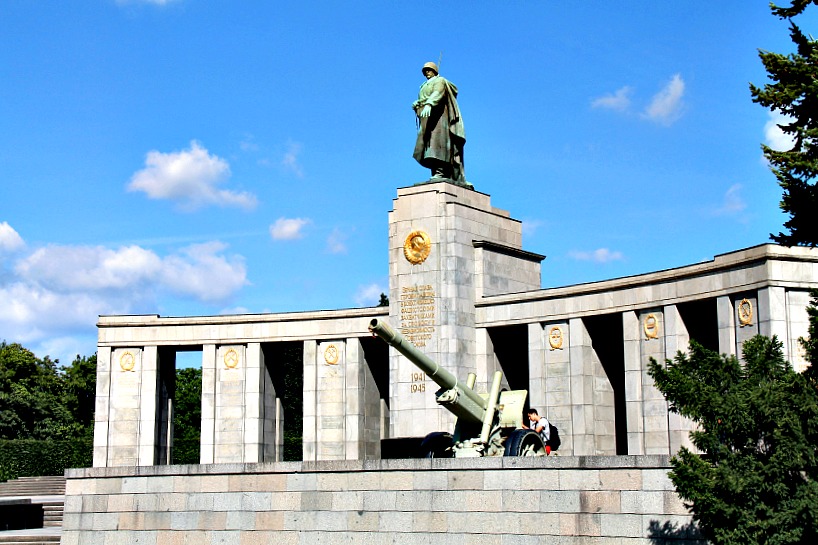 ... flanked by two of the fleet of Red Army tanks that rolled into Berlin in 1945. Now surrounded by lawns and the pretty green woodland of the Tiergarten, it's chilling to think that when the memorial was built, shortly after the invasion, it was surrounded by a wilderness of bombed-out ruins. 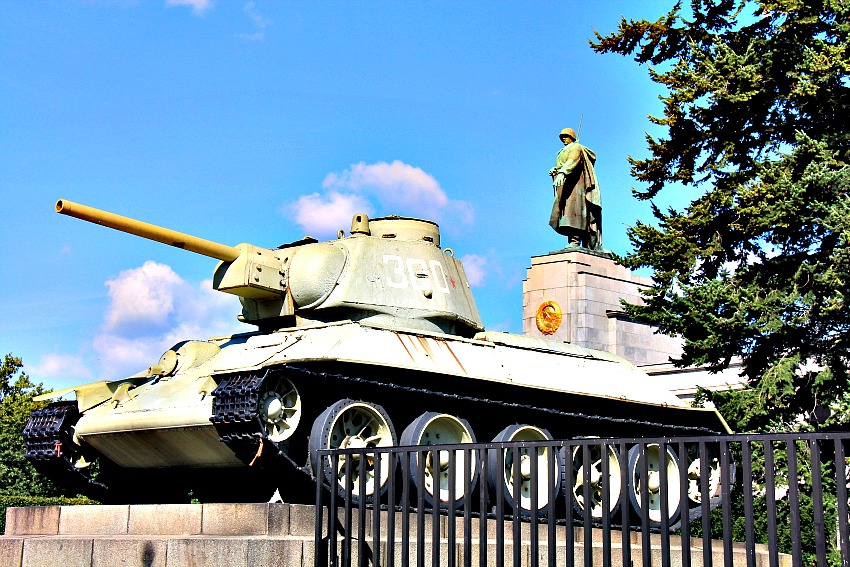 Of monumental size and proportions, it's an in-your-face symbol of military might and domination. Topped by the giant soldier with subjugating hand extended, the memorial was apparently intended to remind East Germans that they should not forget it was the Red Army that liberated them from the Nazis. 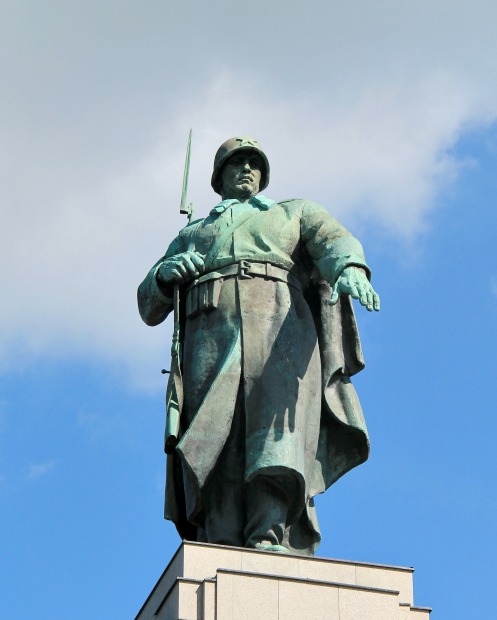 Checkpoint Charlie, or what remains of it, I found disappointing and underwhelming by contrast - a rather tacky reconstruction of the original border construction, it is surrounded by Currywurst cafés, a giant McDonalds and other dubious benefits of western capitalism, and seems to serve mainly as an opportunity for American tourists to pose for photos with pretend soldiers. 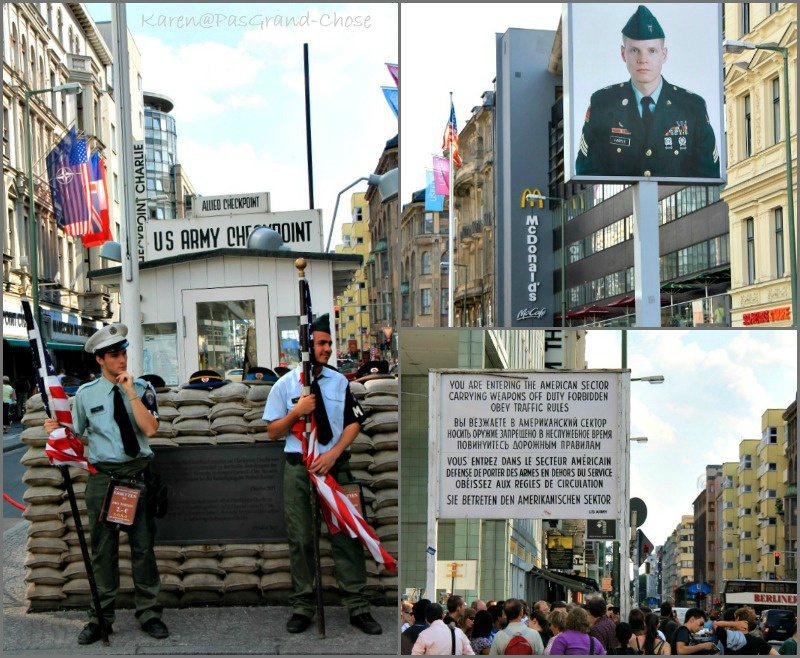 Much more interesting, and moving, was the Topography of Terrors, an outdoor installation documenting terror and resistance from 1933 to 1945. 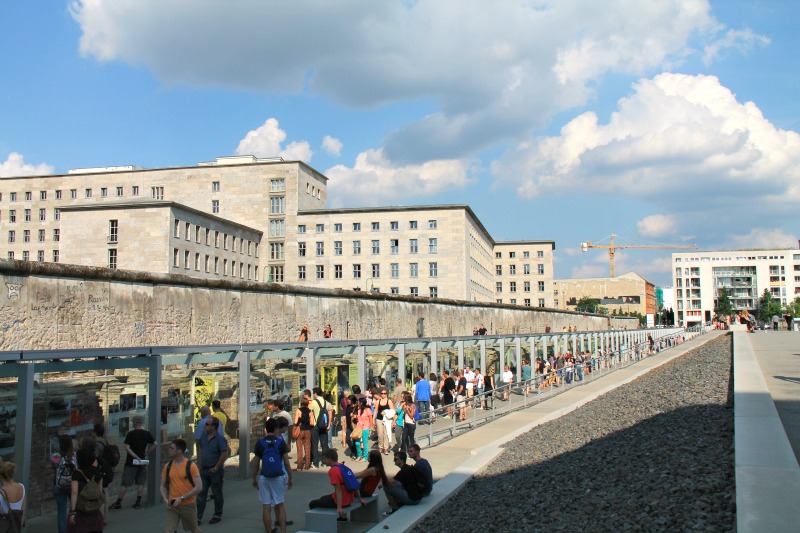 It's located alongside the only substantial remnant of the Wall ... 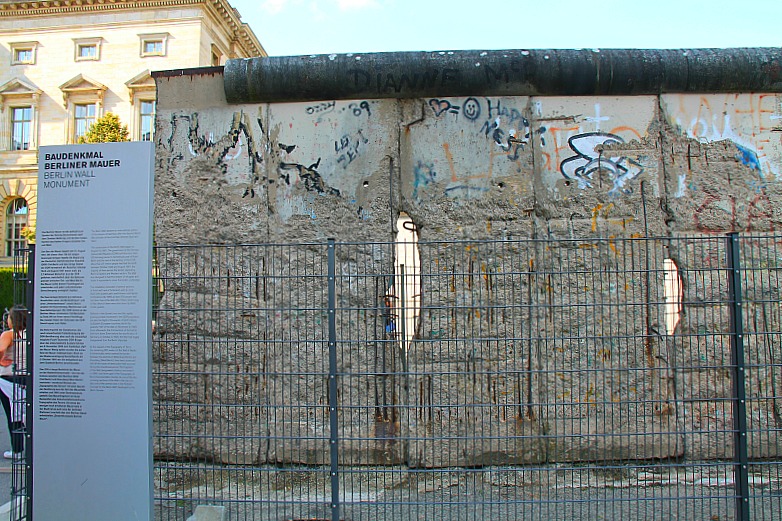 The most political piece of architecture of all time? 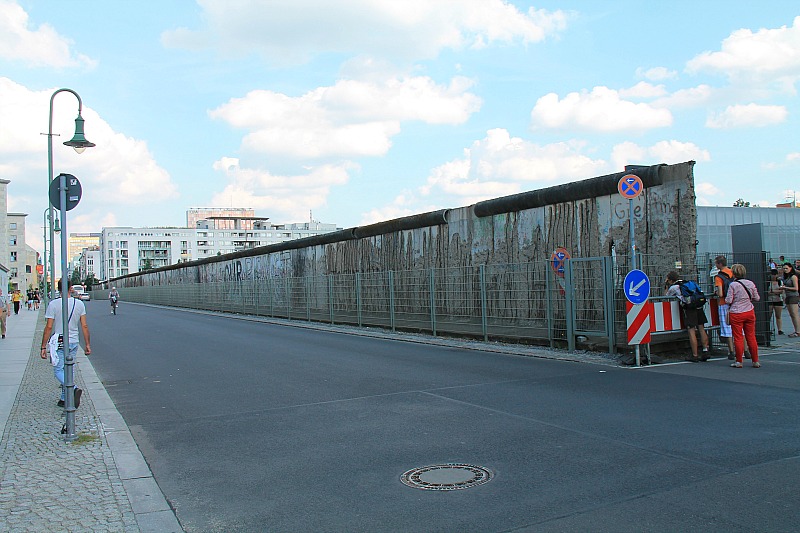 This remaining 200m section of the outer wall is protected from souvenir hunters by a fence.

Some of Berlin's landmark locations are laden with historical significance, without the need for memorials. The Brandenburg Gate was bisected by the Wall - right on the border between former east and west, it was a symbol for years of the city's divide. 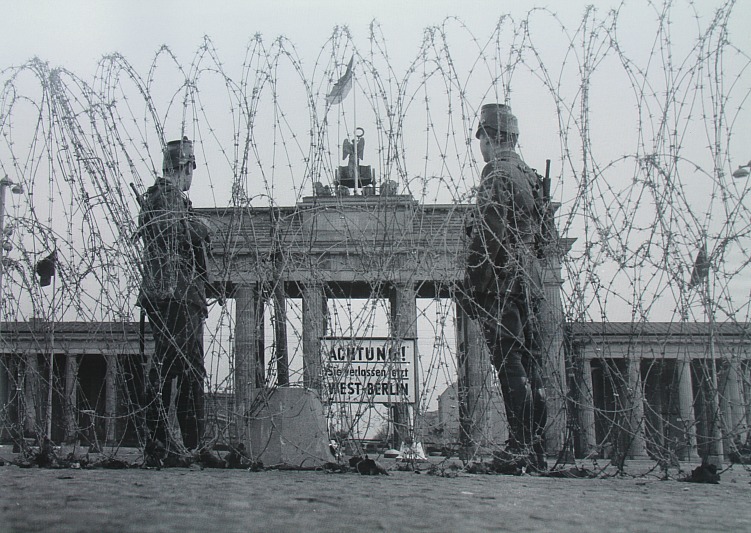 Today the Gate is a symbol of reunification - wandering freely through its massive pillars, the only military presence you'll find is a cast of colourful actors recalling the past ... 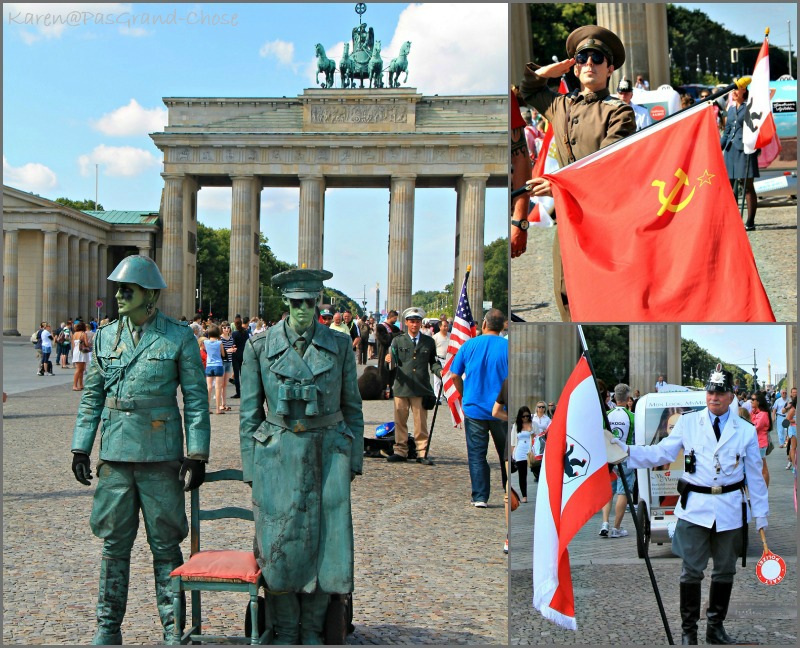 Potsdamer Platz is another site of stunning reinvention. Anyone who's seen Wim Wenders' wonderful film Wings of Desire, made in 1987 before the fall of the Wall, will remember this scene ... 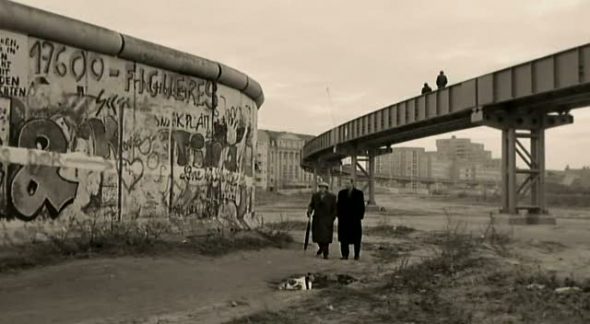 The old poet walks along the Wall on the Potsdamer Platz - flattened to a wasteland of rubble by bombs - accompanied by his angel. His memories of the busy square in the heart of the city don’t match with what he finds before him: "I cannot find the Potsdamer Platz! I think, here… no, that can’t be!"   There’s not the smallest clue to the place he remembers, only soil and unkempt grass.

Today, Potsdamer Platz looks like it was built yesterday ... reconstructed in the 1990s by consortiums of international investors it's a dense collection of (pretty soulless) new buildings (Sony Centre  the HQ of Deutsche Bahn, DB in the photo,  Daimler Chrysler centre …) - symbol of the new, resurrected capital and powerhouse of the EU ... 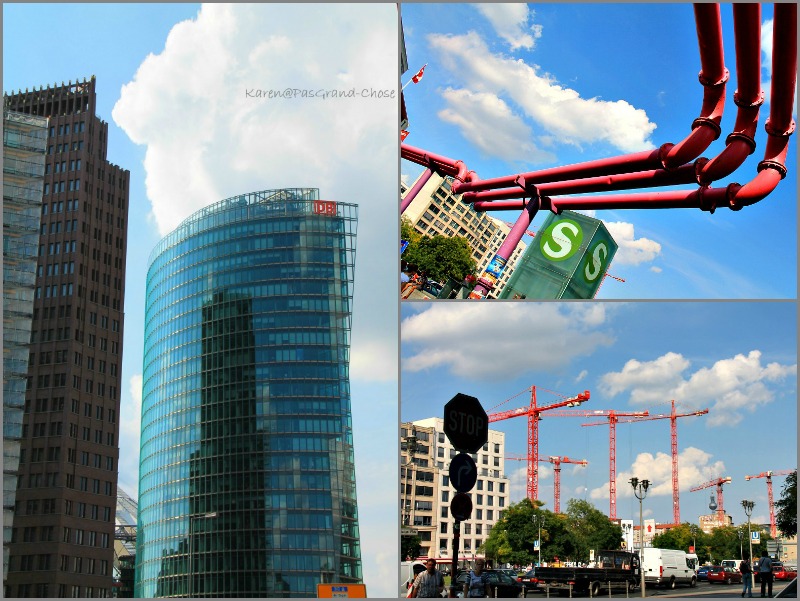 The sea of cranes you see in the square above is maybe the most pervasive sight in Berlin, where literally everywhere you look there is building construction and reconstruction going on. Miles of scaffolding and forests of cranes  are the permanent backdrop to a city in flux, a city that has survived a heavy past, for which forgetting is not an option, yet continually reinvents itself.