The Saatchi Gallery is just one of many places in London I've been meaning to get around to but never quite managed in four years here - probably proving the point that when you're a tourist in a city you see more in a few days than the average complacent inhabitant does in years.

So when the opportunity arose this week to join a small group to be guided round its current exhibition by curator and art historian Victoria Chaine Mendrzyk, I jumped at the chance.

This was the Duke of York Square (where the gallery is situated) on an early spring day this week that couldn't quite make up its mind what season it was ... 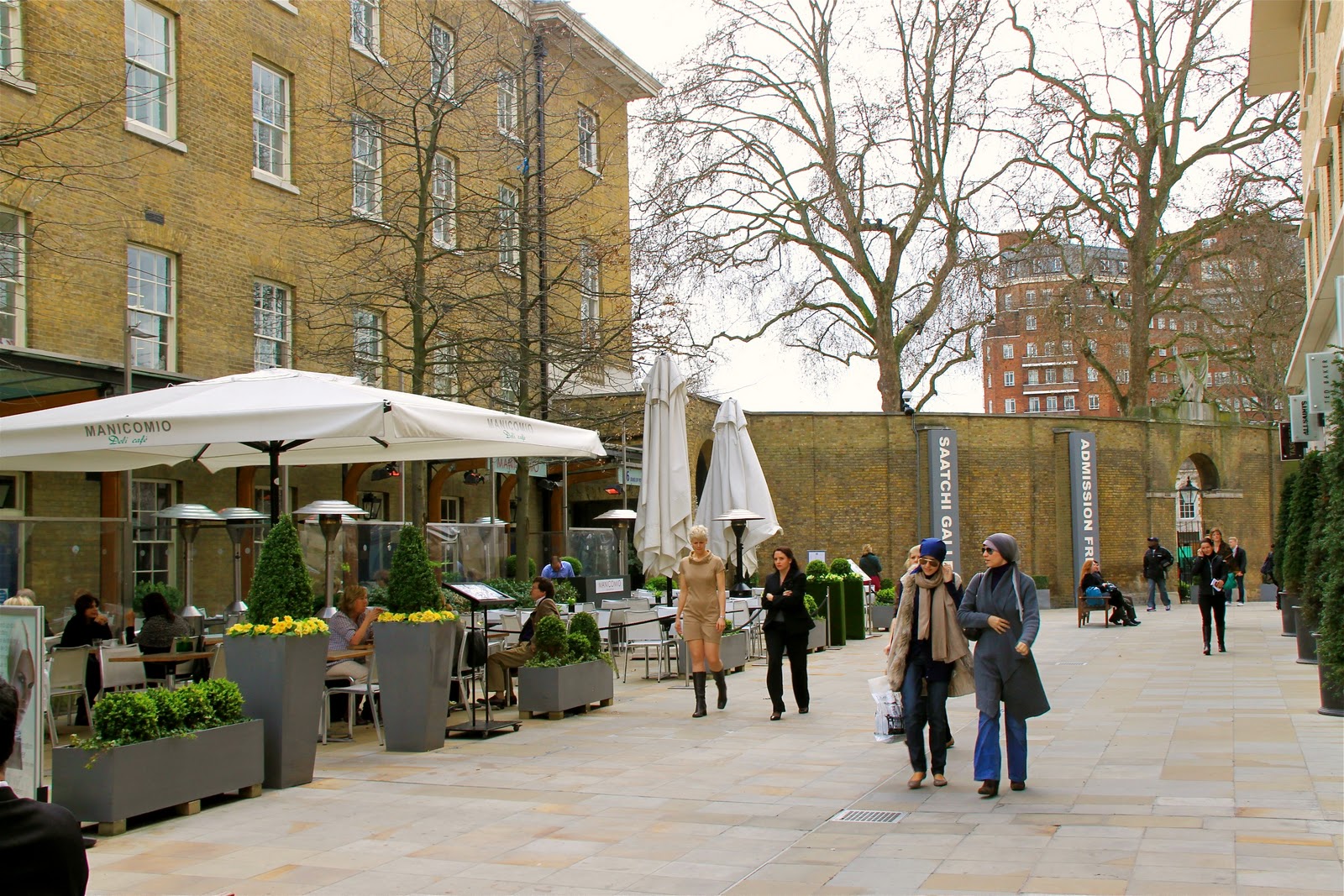 Note the range in dress code, with some layered for the cold and a few brave souls baring their limbs and sitting at outdoor tables (with gas heaters clustered overhead).


Iraqi-born Saatchi turned to full-time art collecting after making his fortune early in advertising, and since then has been one of the single greatest influences on the world’s contemporary art scene. Everything in his gallery is his own personal collection; Saatchi quite simply buys what he likes, taking risks and championing young, unknown, as well as female artists, many of whom have had successful careers launched by being shown in his gallery.

He opened his first gallery in St Johns Wood in 1985, at a time when there was virtually no support or public forum for modern artists in London (the Tate Modern only opened in 2000). In 1997 he brought his personal collection to an exhibition at the Royal Academy called Sensation, which then toured Berlin and New York, living up to its name with some of its controversial content. 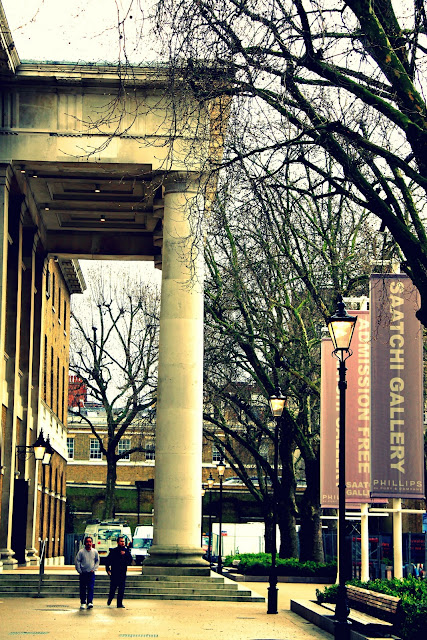 Three years ago he relocated the gallery to its current huge premises in Chelsea (entrance above), which he had renovated into a series of interconnected, light, open spaces... 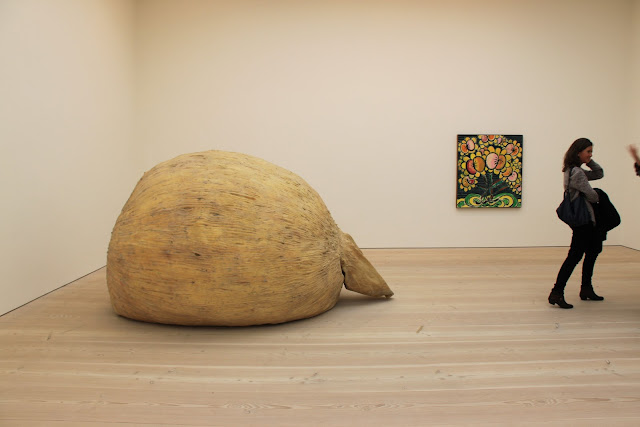 I was happy to see that these were filled with parties of school children and art students, and a policy of free admission. 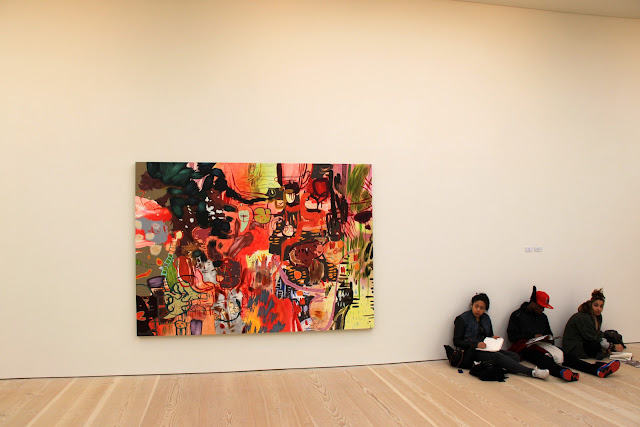 What a pleasure, too, to be told I was welcome to take as many photos as I liked, with or without flash. (In fact there was so much natural light that flash was never necessary). 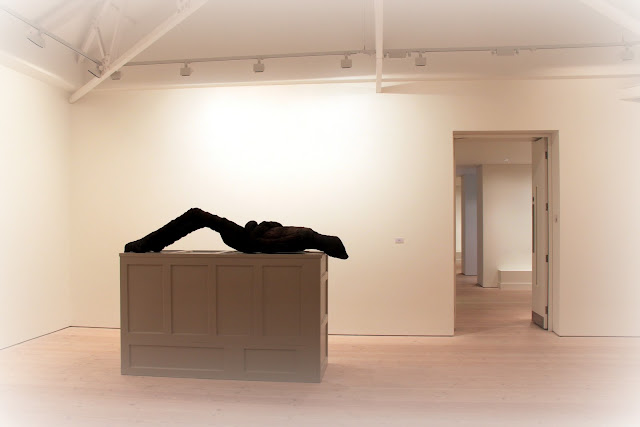 I'm not the first person to find this gallery a friendlier and more conducive-to- display space than the Tate Modern. 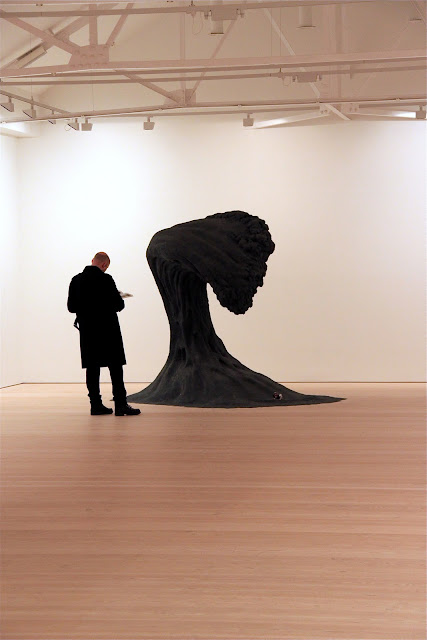 The significance of the current exhibition - Newspeak: British Art Now - is that it is the first time since the Sensation exhibition that Saatchi is showing the work of emerging artists from this island (defined as any artist working in Britain, regardless of nationality).
These were a few of the things I found most interesting... 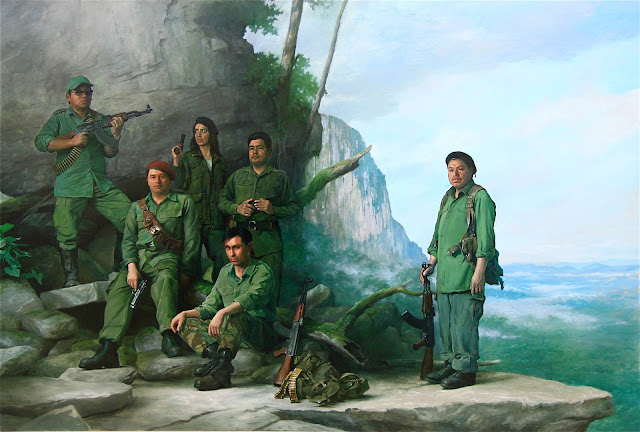 Jonathan Wateridge's amazing, huge oil paintings with photographic quality (above and below) explore media and cinematic portrayal of world events and our consumption of these kinds of images. 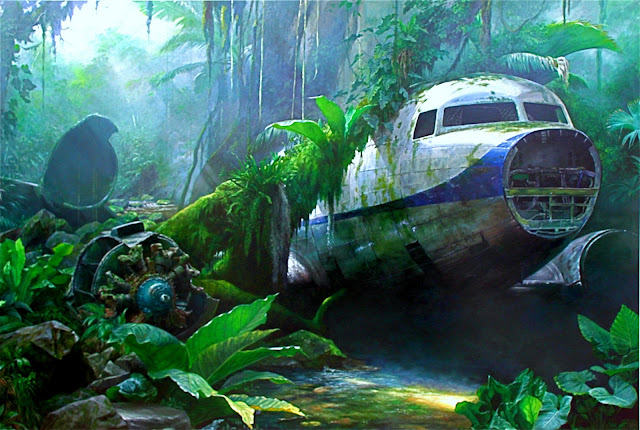 
The most extraordinary of all the exhibits for me was Tessa Farmer's bug case. The photo below shows the scale of the glass case she constructed to contain her art works - a kind of modern, glass-and-steel cabinet de curiosités. But what are those tiny dangling specks inside it? 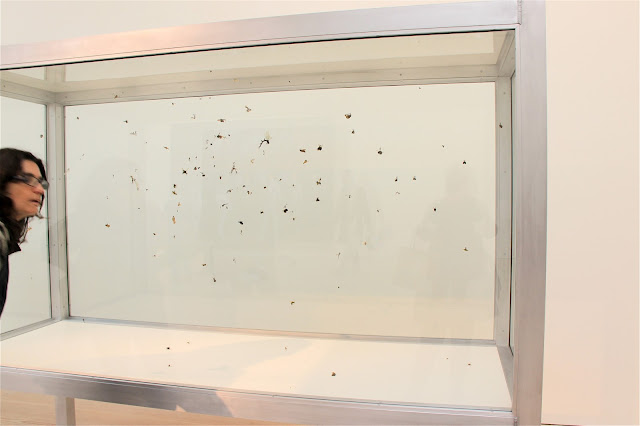 They are minute sculptures made of remnants of insect bodies and other bits of dried organic matter - sculpted into tiny figures on winged insects ... 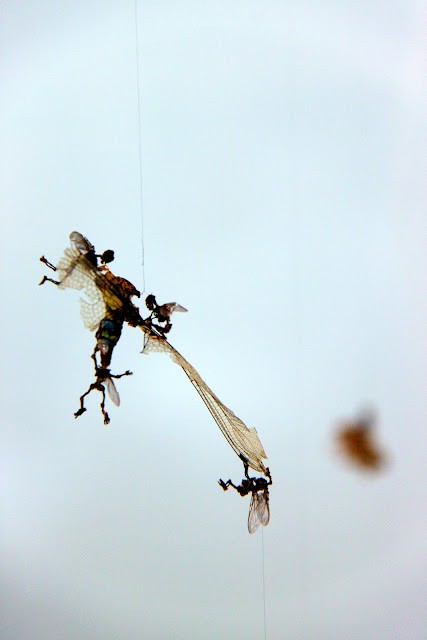 Looked at from up-close, they are arranged in battle-formation, as what she calls "hell's angels of a microscopic apocalypse" ... 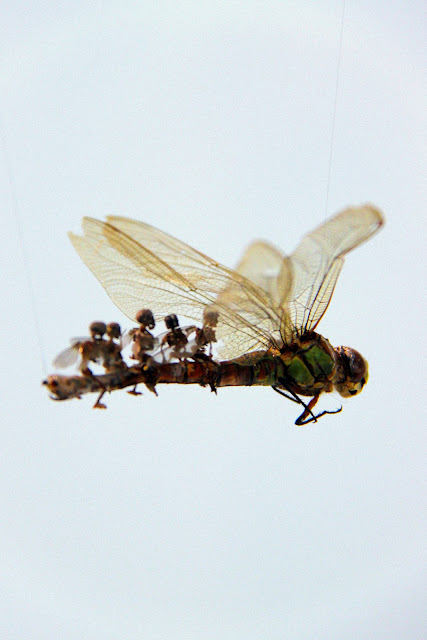 South African-born Carla Busuttil's crude, primary-coloured portraits (below) are based on media images, and arise from her interest in the way people in positions of power are popularly portrayed. 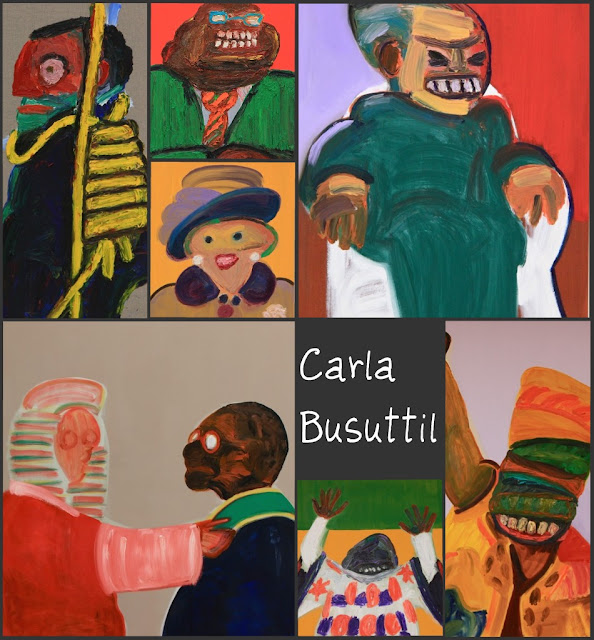 You can spot Margaret Thatcher in the centre, Saddam Hussein (with hangman's noose), Jacob Zuma (bottom middle, styled after Jonathon Shapiro's infamous 'showerhead' cartoons of him), and Robert Mugabe, bottom left, in a portrait titled Don't Tell Marley (referencing Bob Marley's concert in Zimbabwe in the early days of independence, implying that Marley might turn in his grave if he knew how the other Bob's rule had panned out). 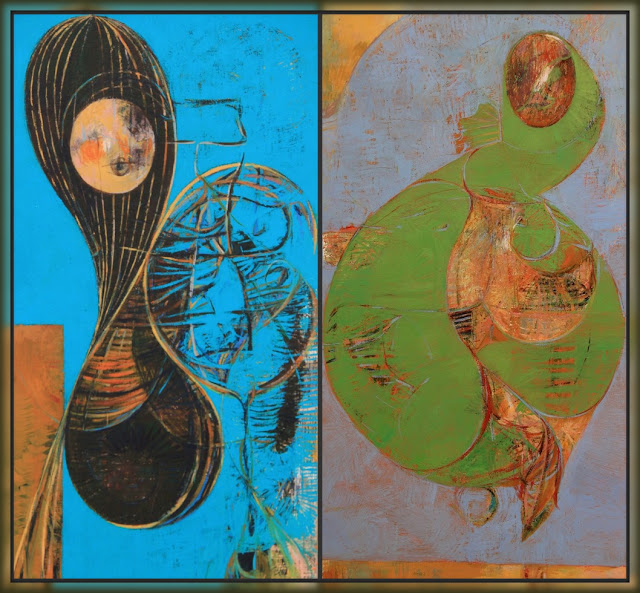 
Nicholas Byrne's intentions with these oil paintings (above and below) are inscrutable to me, but I loved the colours and forms he creates with them ... 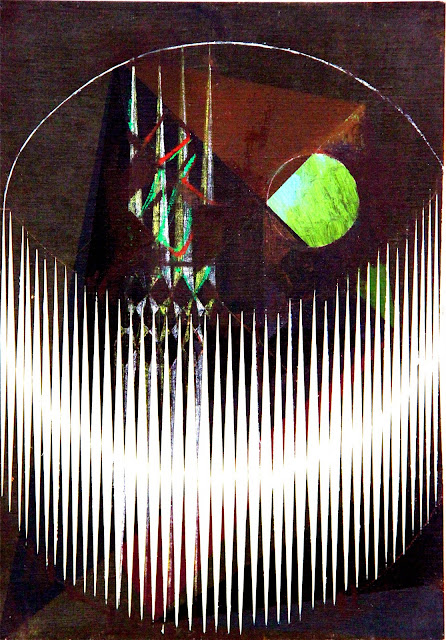 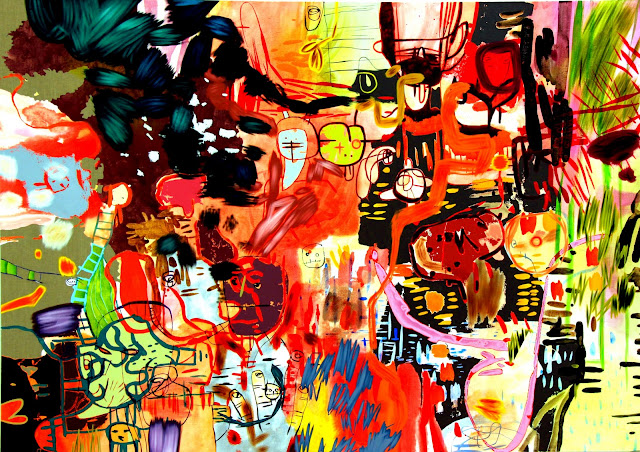 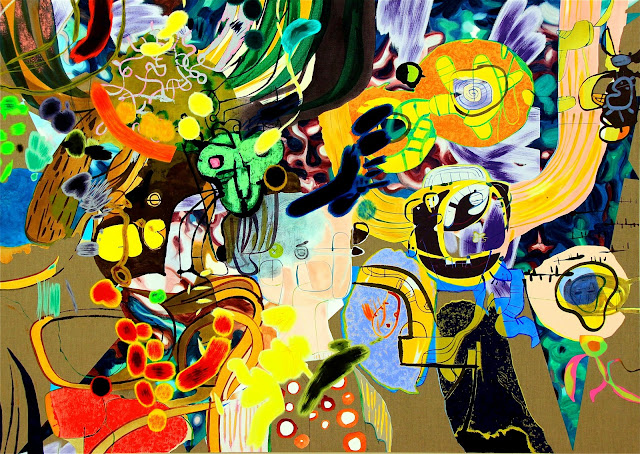 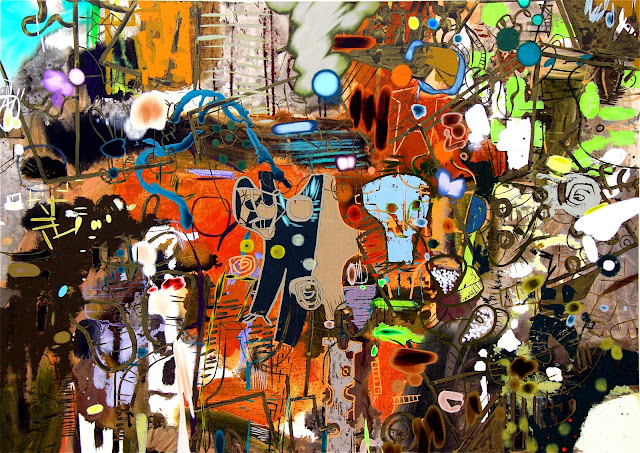 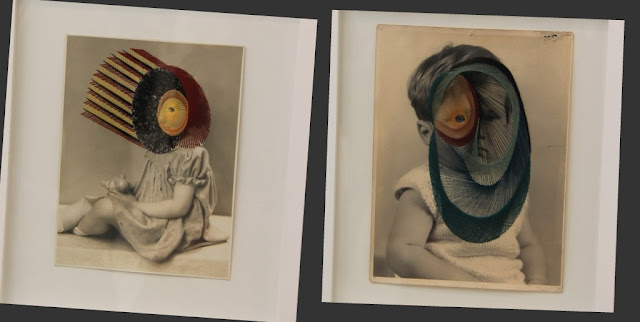 
... and Maaike Schoorel's oils, based on old family photographs, are so faint and ethereal that they force the viewer to actively interpret and reconstruct the images - a deliberate counter to the high speed, disjointed presentation of images in the media ... 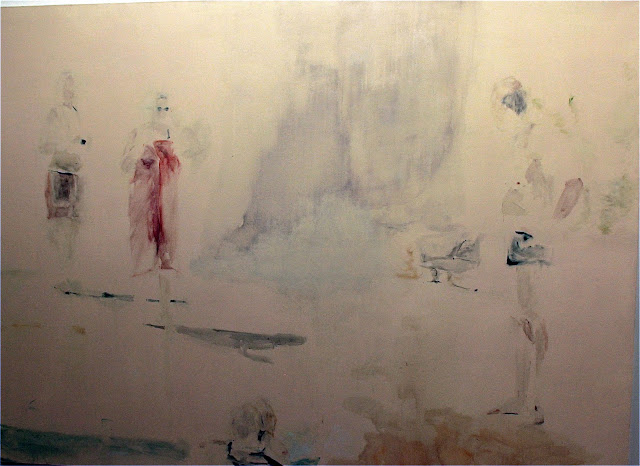 
Last year Saatchi announced his intention to donate his gallery and around 200 art works to the British public.  He's not been without his critics - Tracy Emin, who owes her very successful career to his patronage, famously refused early on to sell her works to him because of the Saatchi brothers' advertising campaign that helped Thatcher get into power in 1979, citing Thatcher's 'crimes against humanity' (good on you, Trace), though she later reconciled with him, perhaps realising which side her bread was likely to be buttered.  Whatever you think of him, you'd have to admire this gift to the nation.