I have a photo of myself aged 21 walking down a station platform in Irun in mid-winter (in standard jeans, parka and backpack of Eurail student) taken by the boyfriend I was travelling with from Lisbon to London (the trip a birthday present from my parents) - my expression reflecting some dismaying news about non-arriving trains at the same time as a clear delight at the adventure we were having - and in the background is a wall covered in colourful graffiti, proclaiming Basque separatist ideology (those were radical times for the ETA). The political stuff was interesting  enough, but that weird language intrigued me just as much. I knew back then that it has no modern language relatives and its origins are a linguistic enigma. 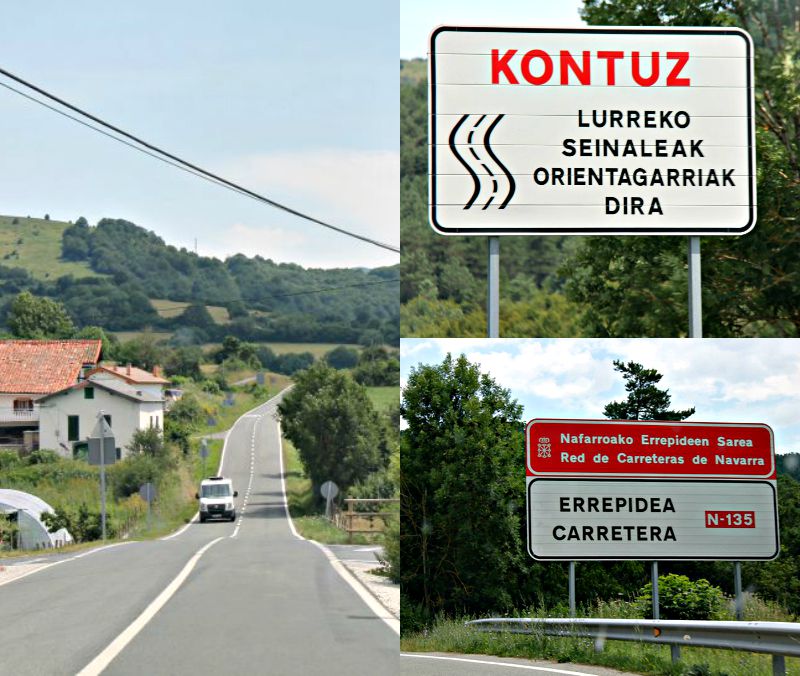 which is why on this trip I was compulsively snapping signs in Basque on the drive out of Pamplona towards the Pyrenees and France. 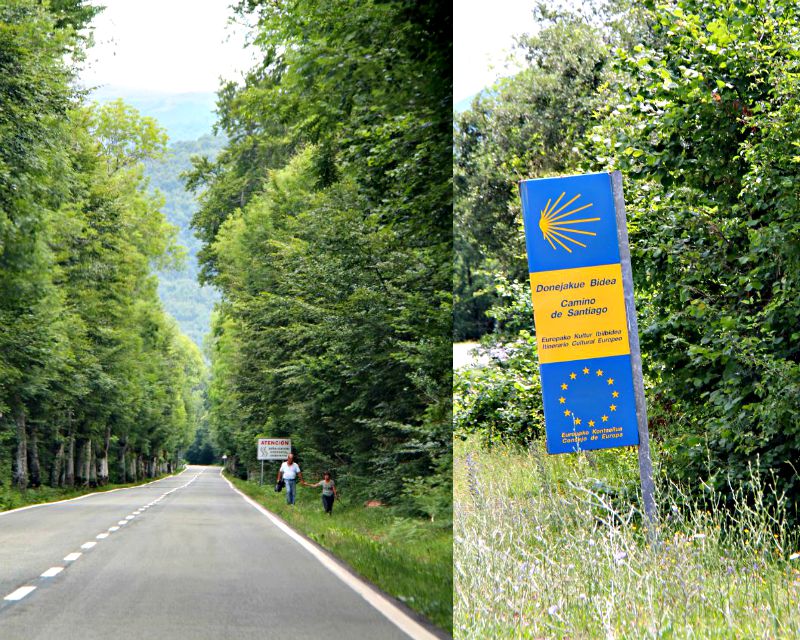 We were firmly back in Camino territory and the road was dotted with pilgrims heading in the opposite direction towards Compostela. Several sections of the route are on motorways (not much fun for walkers?), so pilgrims take detours through the forest and mountain paths whenever they can. 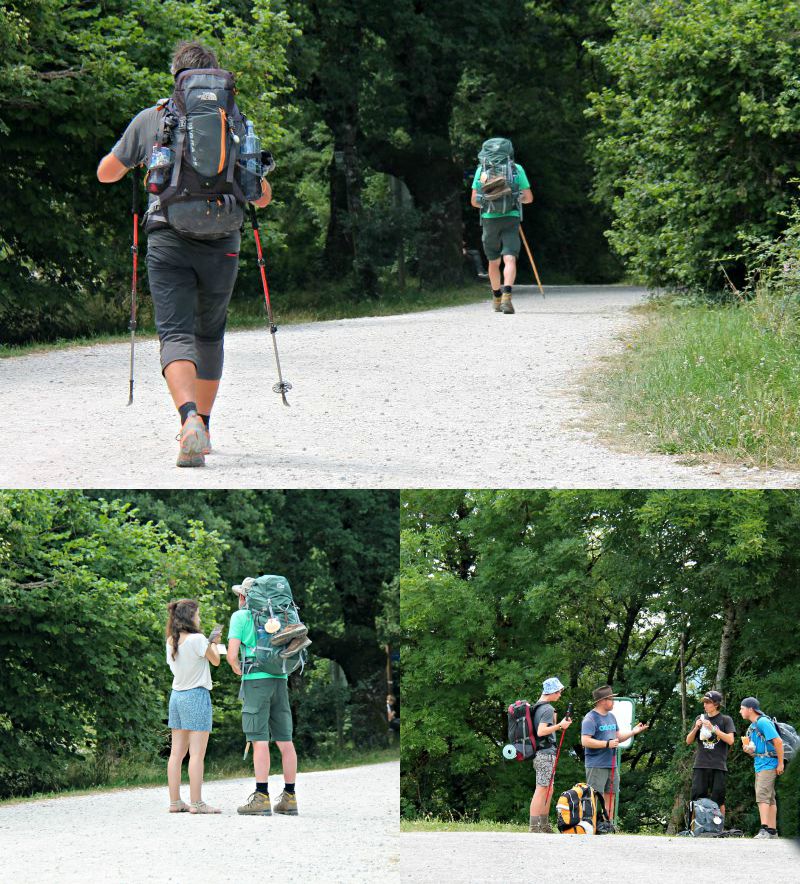 Pretty soon we were climbing high into the Pyrenees, where Hannibal marched with his elephants en route to the Alps and Italy. 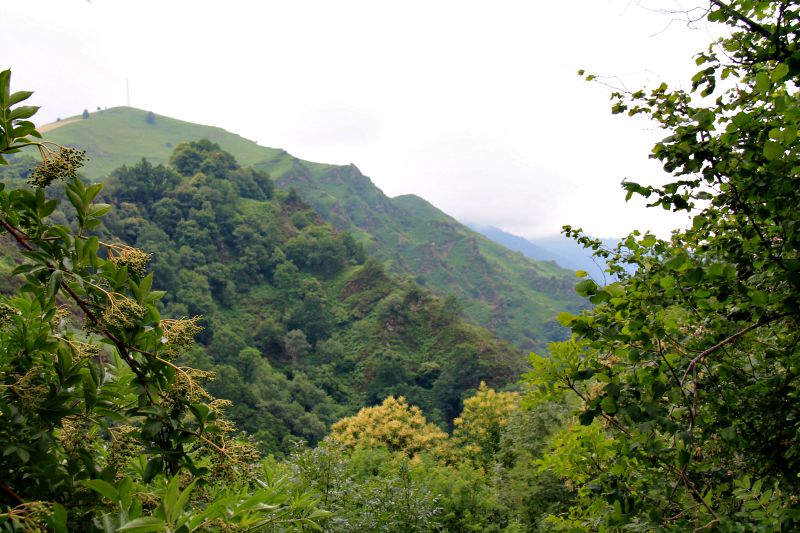 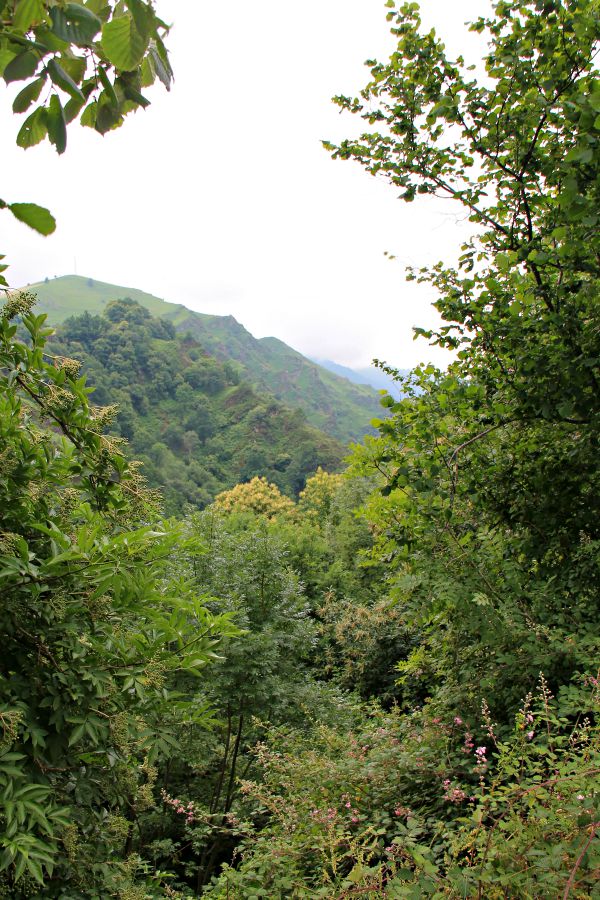 First stop was Roncesvalles, where Roland famously blew his horn in vain according to legend, defending Charlemagne against the Basques. 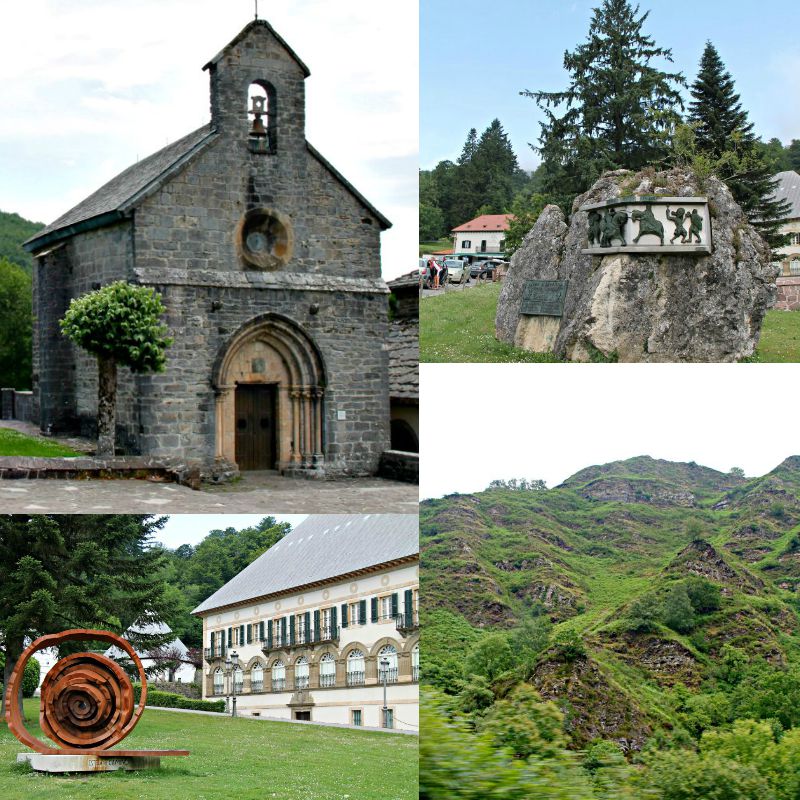 Memorials to Roland in the centre of Roncesvalles

The views are just stunning in these mountains, and just as beautiful in summer as I remembered them under deep snow from my winter train trip at 21 and from childhood journeys en route to skiing. But on these narrow winding roads there are very few places where one can safely stop to photograph all this beauty 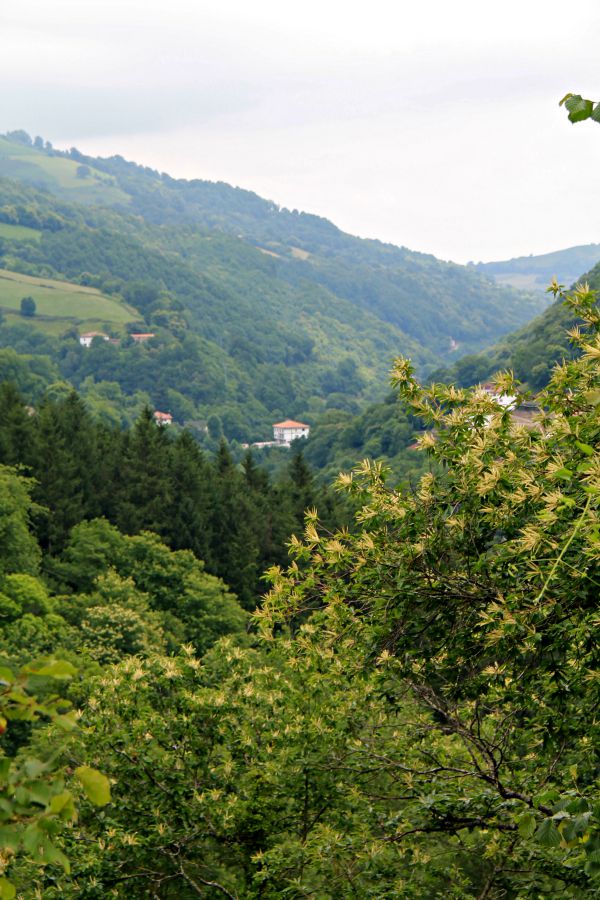 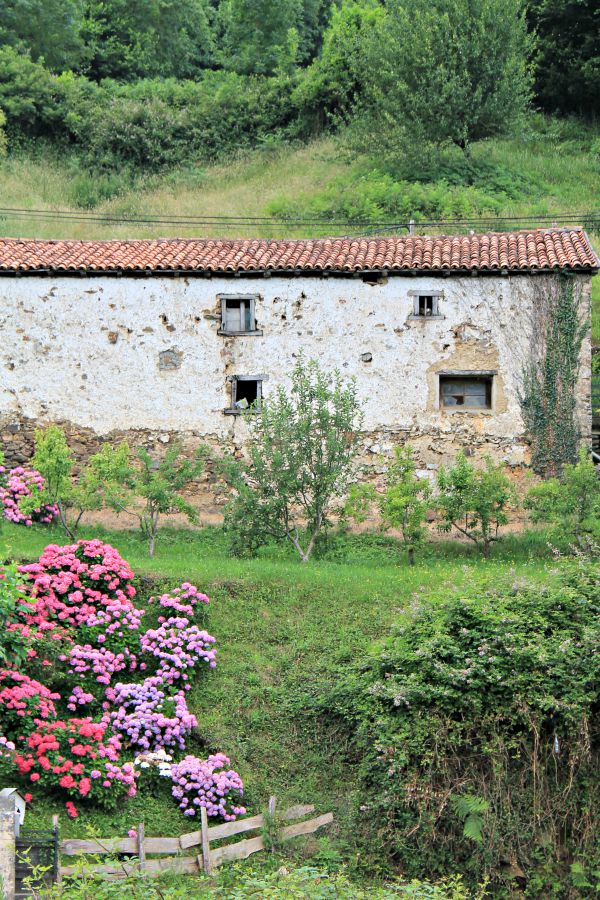 At some point one crosses the border imperceptibly, the only indication being that the language of road signs becomes French. 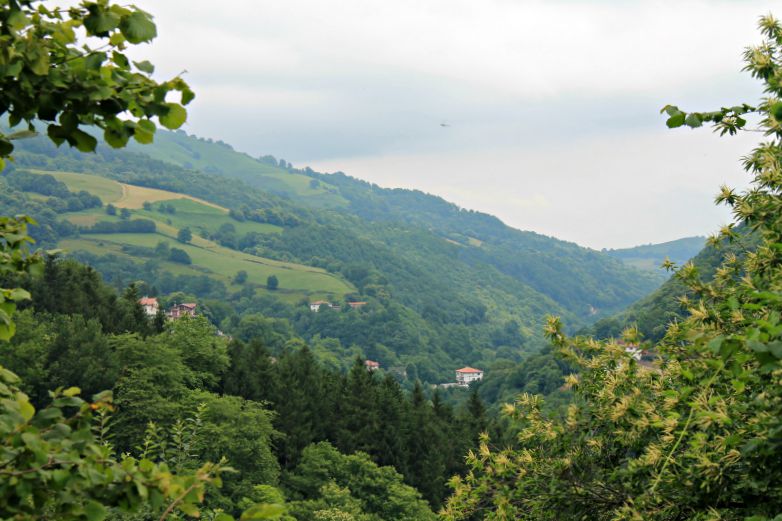 And we wind down to the pretty town of St Jean Pied de Port. 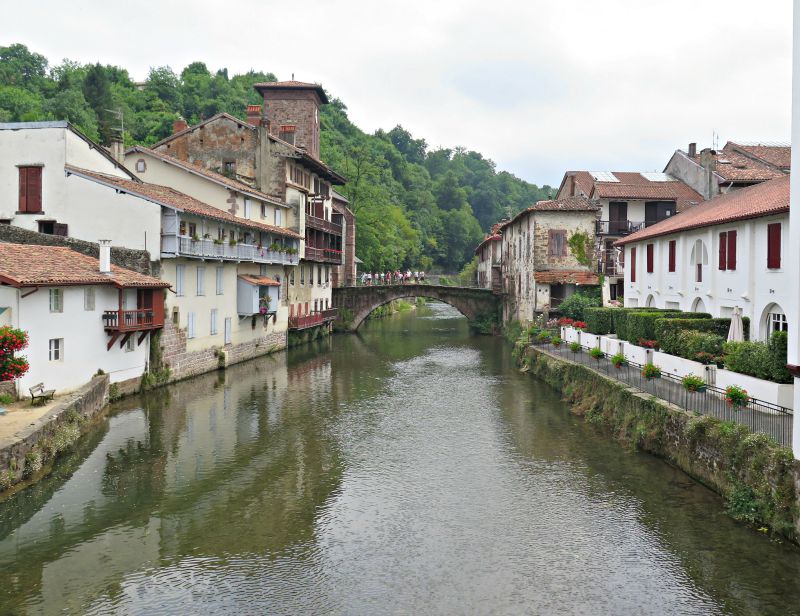 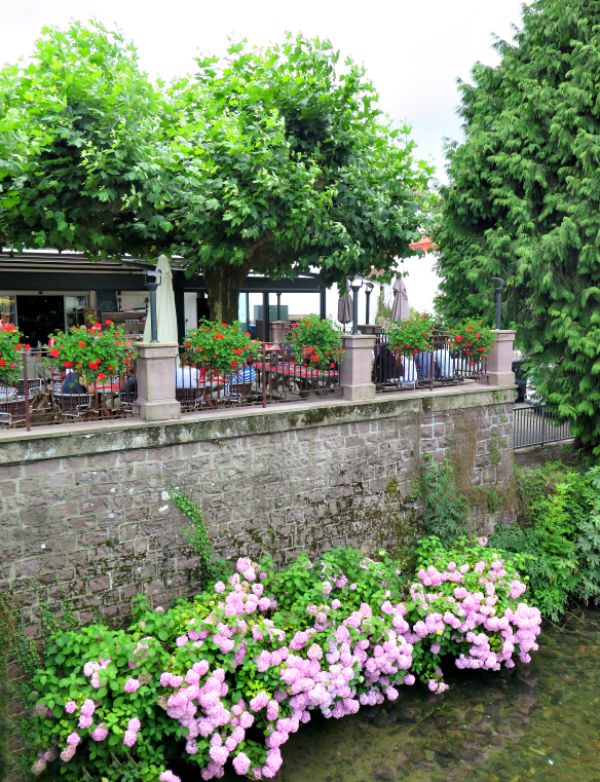 This is the starting point for many Camino walkers and shops do a roaring trade in kitting them out for this now highly commercialised walk. Sitting across the road from this place I watched many a hopeful pilgrim walking out with bulging bags containing the full kit ... 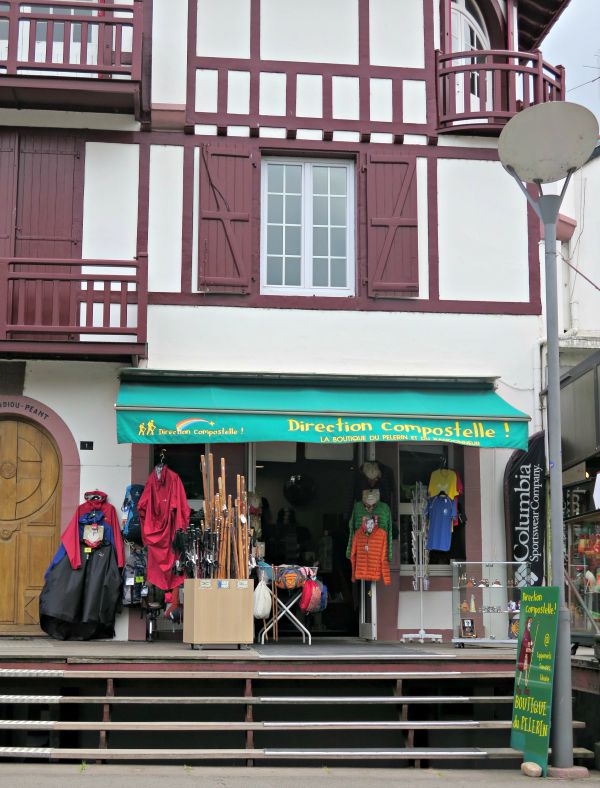 while the baguette and French beer suddenly assumed a significance, marking our exit from the Iberian peninsula to this side of the Pyrenees and the end of our trip. 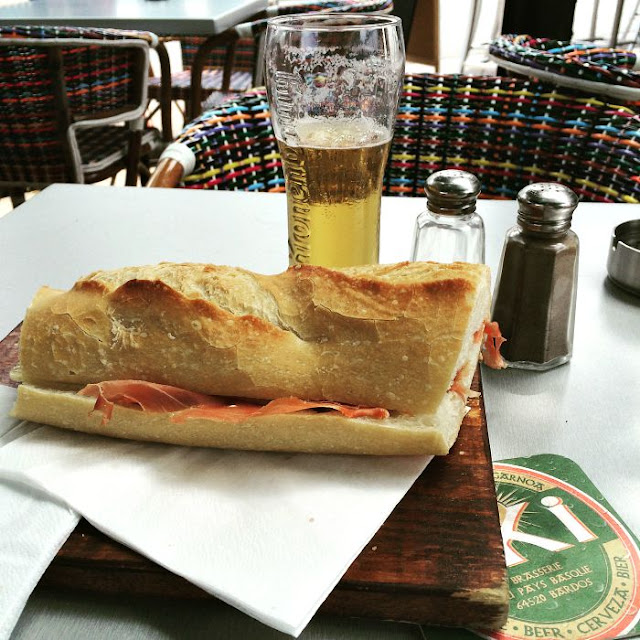 That evening in Saint Front de Pradoux, near Bergerac, there was a pool to take the edge off the heat, a friendly house labrador, and dinner in a garden where the sun set after 10, before the long drive the next day of 1000 kms back to London. 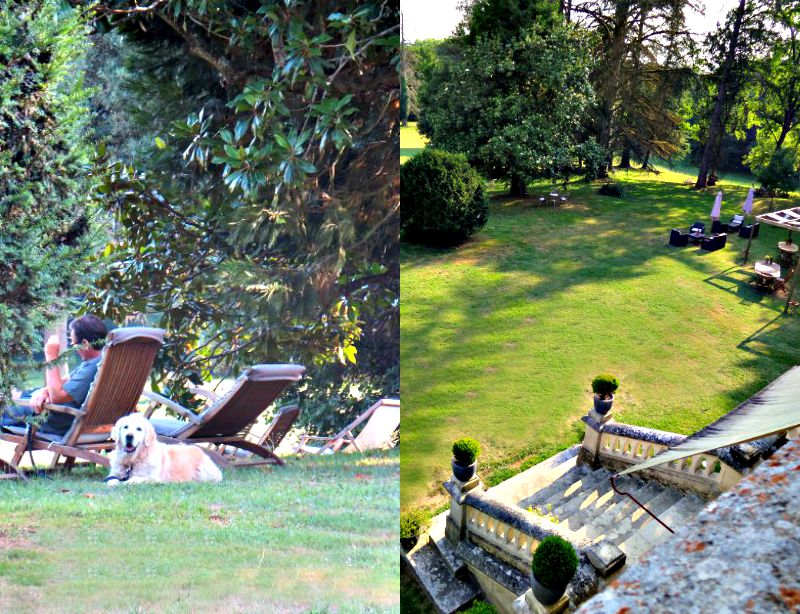 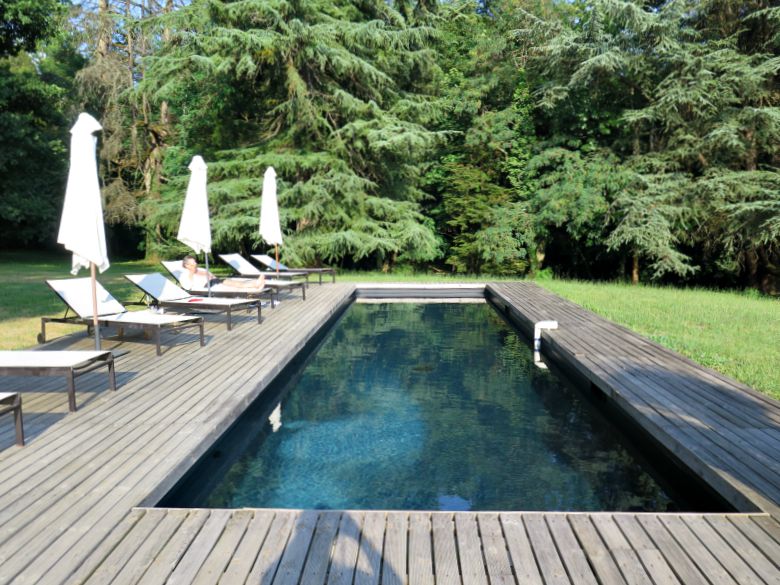