Bomb plots, religious extremists, figures of hate? Nothing new about that in England. But when it's all wrapped up with roasted bangers and chestnuts and a spot of fireworks, it seems quite benign - a bit of family fun rather than a metaphor for religious intolerance. 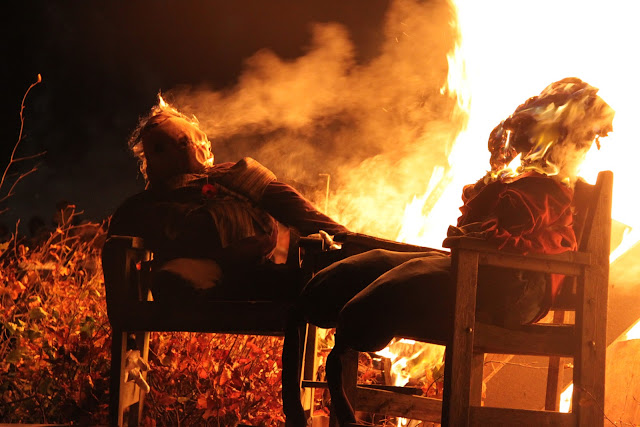 Last night we joined the people of Cookham Dean Village in Berkshire for the annual burning of not just one guy, but quite a few, on this pyre on the village green. 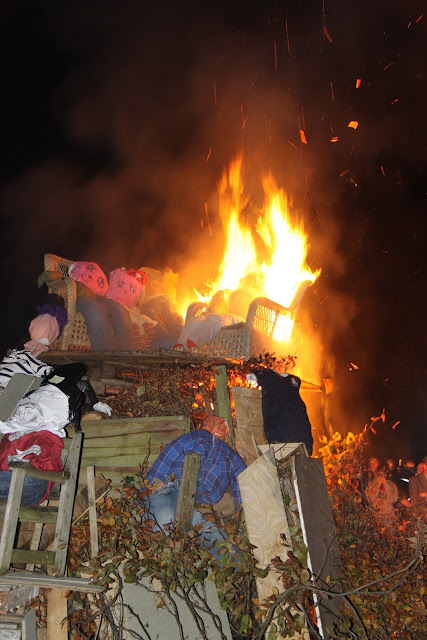 These guys were made, following longstanding tradition, by local school children. Though it seems the tradition of dragging them around the neighbourhood on wheeled carts shouting "A penny for the guy!" (which I remember from childhood days in London) is over. 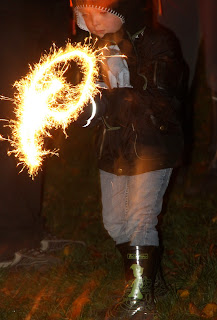 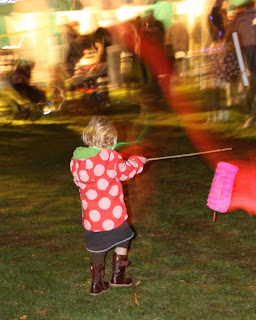 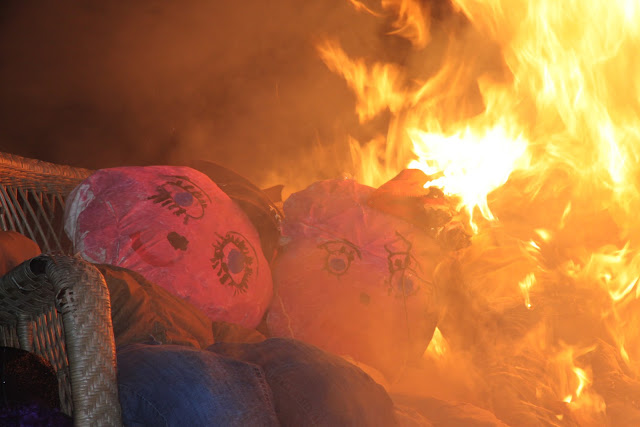 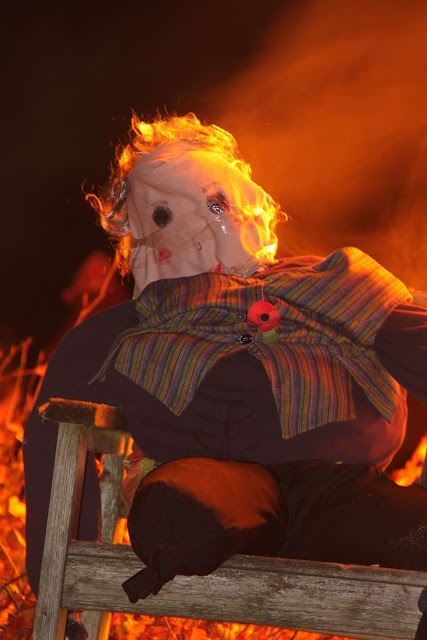 Observe the resemblance! This one below is practically the spitting image of Guido himself! 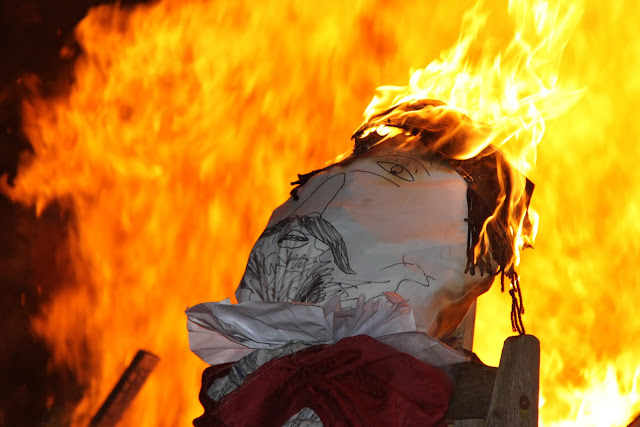 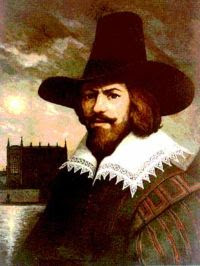 Fawkes was not actually the leader of the gang of Catholic conspirators who, fed up with continued oppression of their faith, plotted to blow up both King and parliament on the 6th November 1605. He was the powdermonkey, the explosives man, and therefore the one unlucky enough to be caught in the cellars under Parliament the night before (5th November), waiting to detonate 36 barrels of gunpowder. 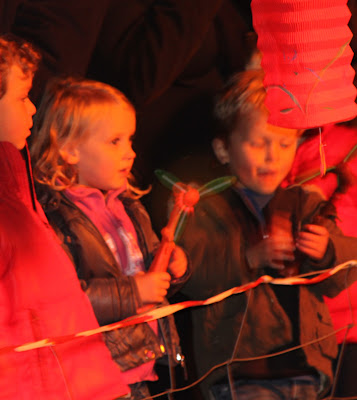 King James I responded by cracking down even harder with the anti-Catholic measures and apparently decreed that all loyal (read Protestant) subjects should celebrate by lighting bonfires every year on the anniversary of the foiled plot. No, I don't quite follow the logic of that last bit either, but it must have seemed a good opportunity to give vent to fear and prejudice by burning effigies of the Pope or, in more recent history, Guy himself. 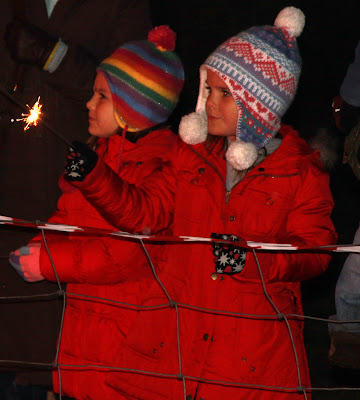 More than that, the date happened to tie in quite neatly with All Hallows Eve (Hallowe'en) and the much older Celtic festival of Samhuin (still celebrated in Scotland - read here) marking the chasing out of summer by winter at the start of November, in which bonfires played a big part. 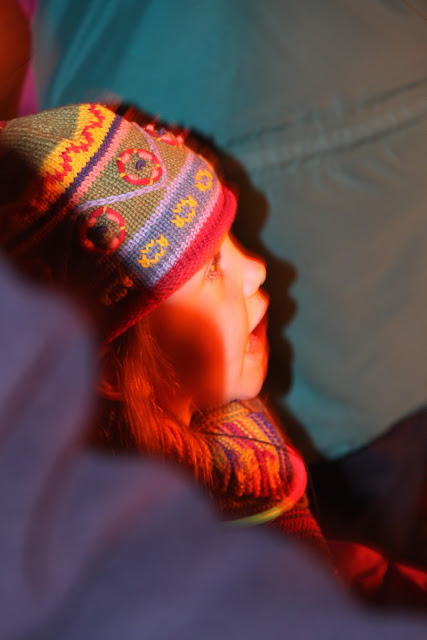 The area around the village of Cookham Dean was settled 4000 years ago. Successively, Celts, Romans, Saxons and Vikings have made their lives here, so no doubt all of these rites have played out on or around this green for millennia. It appears in the Domesday book of 1086 as Cocheham (containing '32 villagers, 21 cottagers, 4 slaves, 2 mills, 2 fisheries and woodland at 100 pigs').
This is also the site of the Wind in the Willows:  Kenneth Grahame lived and wrote here, inspired by the Thames at Cookham to  enjoy nothing better, like Ratty, than 'simply messing about in boats', while the adjoining Quarry Wood in Bisham was the original Wild Wood. 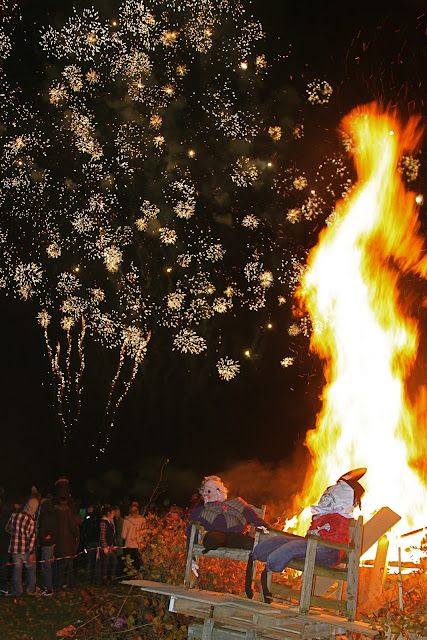 As the guys went up in flames one by one, the fireworks started, lighting up the sky for miles around with pyrotechnic colours. 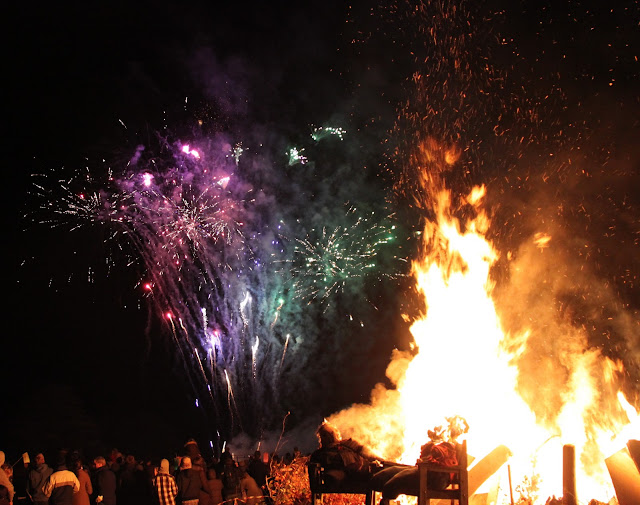 Whether or not one harbours either pagan or anti-Papist sentiments, we set the clocks back on 31st October, bringing suddenly darker evenings and the prospect of increasingly longer nights. There's something about fire - the warmth and comfort, driving out of darkness - that has undeniable appeal at this time of year.
Happy bonfire season to one and all... 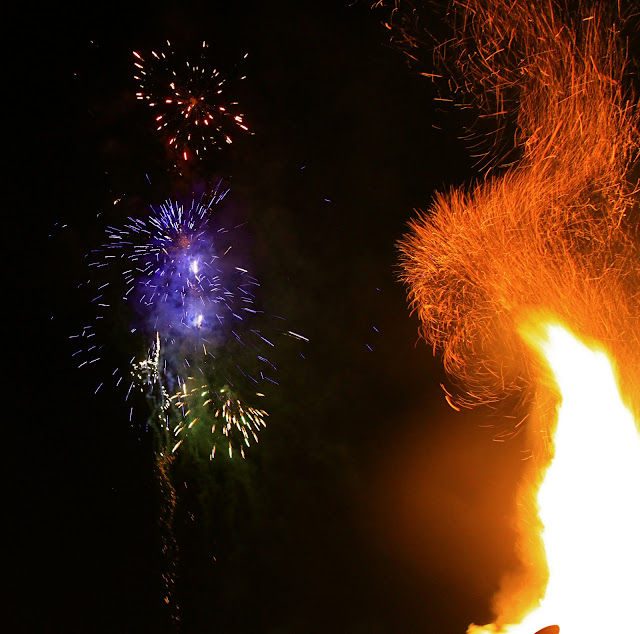